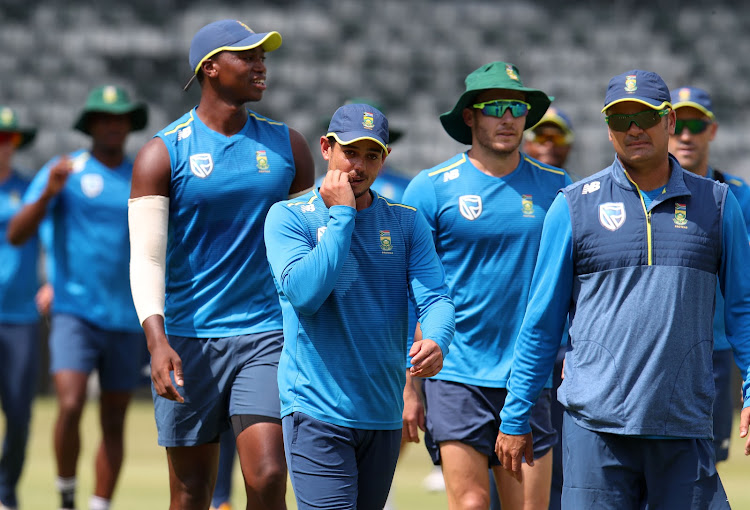 SA limited-overs captain Quinton de Kock and bowlingn coach Charl Langeveldt leads the team out for a training session at the Wanderers in Johannesburg on February 19 2020 before the Covid-19 disruptions.
Image: Muzi Ntombela/BackpagePix

Quinton de Kock says he enjoyed having to carry the Proteas on his small shoulders as he stood out like a sore thump with his inspiring performances during South Africa’s worst ever season and home summer.

The reigning SA men’s cricketer of the year was the only shining light with four half-centuries during a dark home summer for the Proteas in which they folded 3-1 to England in the four-match Test series.

The Proteas limited-overs captain led by example in the ODI series against Eoin Morgan’s visitors with a century and added three more half-centuries in the home series against England and Australia.

Apart from scoring much needed runs for the team‚ De Kock also keeps wicket on top of his limited-overs captaincy responsibilities.

That led to a perceived concern that the 27-year-old hard-hitting left-hander has too much on his shoulders‚ but the star wicketkeeper batsman said he actually took pleasure in carrying the team.

“I think at some point‚ I’m not going to lie‚ I actually enjoyed that extra responsibility. I actually really enjoyed it whether or not it was there or not‚” said the Titans poster boy.

De Kock said while he enjoyed carrying the team‚ he is excited about the young talent coming through in the limited-overs team post the disastrous 2019 Cricket World Cup in England.

“Towards the end of the season you could see the amount of potential coming through.

“Obviously we saw guys like Janneman Malan‚ Hendrick Klaasen‚ Lungi Ngidi after his injury coming through.

“A guy like Anrich Nortje‚ all these guys‚ Temba Bavuma obviously‚ these guys know they themselves that they want that responsibility (to carry the team) also and to be one of the best players in the world and that is what they are striving for and it is good to have that around.

“I don’t think it is healthy in a team where people are dependent on one or two players. So it’s nice to have those guys coming though to help out on occasions.”

He scored most of his runs batting deep at number seven and there are those who feel he could have scored more runs had he batted up the order.

“No particular (order) number‚” said De Kock when asked where he prefers to bat.

“I think me and (team director) Mark Boucher have a very good relationship and we spoke about it (where I want to bat) before and we wanted to push me higher on the batting rankings but obviously with the team selections and stuff it is a little bit difficult.”

De Kock was promoted to five in the fourth and final Test against England with Bavuma dropping down to six.

“I finally got to bat at five and I think I am pretty much happy at number five but that is only for now.

“I mean things could change and I could bat.....to be honest‚ I don’t know what could happen in the future but for now at number five in my last game I was very comfortable there.”

“I felt that I could score big hundreds batting at five‚ so for now‚ that’s the place where I need to bat but I mean you know things could change and you never know what could happen.”