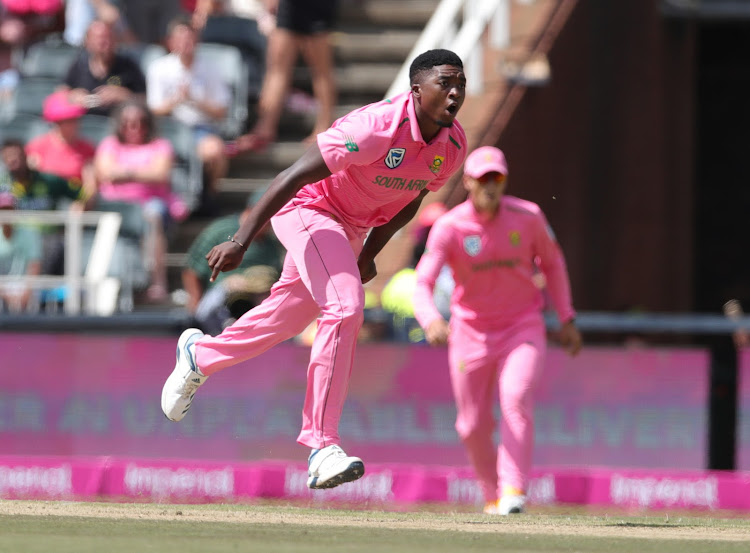 Lutho Sipamla bowls during the Pink Day ODI match between the Proteas and England at the Wanderers in Johannesburg on February 9 2020.
Image: Samuel Shivambu/BackpagePix

Fast bowler Lutho Sipamla says he cannot wait to steam in at the fastest cricket ground in the world when the season resumes after relocating from Port Elizabeth to Johannesburg to join the Lions.

The former Warriors speed merchant‚ one of the brightest young fast bowlers on the domestic circuit who can crank it up to speeds of up to 145kph‚ will hone his craft at the Wanderers Stadium after he joined in March.

“I’m definitely looking forward to it‚” said Sipamla‚ who made his first-class debut for the Warriors at the Wanderers in 2017.

The 21-year-old Grey High School old boy is confident the move to Johannesburg will take his career to another level.

“The whole reason behind it was to improve as a player and to grow as a player. Bowling in the Highveld where it is bouncy and quicker with faster wickets is something I’m really looking forward to.

“I’m looking forward to working on my discipline as a fast bowler and making sure I am more consistent and bowl tight lines and giving batsmen problems.

“So I’m really excited and looking forward to the move. Hopefully I can do great things with the Lions.”

Various franchises across the country reopened their doors last week after sports minister Nathi Mthethwa gazetted for the return to training of non-contact sport such as cricket despite rising Covid-19 cases.

Seven people have already tested positive for the coronavirus after Cricket South Africa (CSA) started conducting tests on players and staff at the six franchises in the past days.

Sipamla is nevertheless looking forward to joining Kagiso Rabada at training at the Bullring and learning from the Proteas fast bowling kingpin.

“I am definitely looking to getting back to practice. We have been in lockdown for quite a long now.

“It’s has been quite a long wait so really excited to get back on my craft again and work on my skill towards the new season. I’m very excited about it and looking forward to it.

Sipamla rose to national prominence in 2018 following his rookie selection by the Tshwane Spartans in the Mzansi Super League’s inaugural edition player draft.

He transformed himself from being a surprise draft pick to ending as the tournament third-highest wicket taker with 16 scalps from 10 matches.

The BCom student at the Nelson Mandela University in Port Elizabeth said he idolised the likes of Allan Donald‚ Makhaya Ntini‚ Shaun Pollock‚ Dale Steyn and Morne Morkel while growing up.

“A large influence as well of all the West Indian fast bowlers in the 80s and 90s which were Michael Holding‚ Andy Roberts‚ Joel Garner‚ Malcolm Marshall‚ Courtney Walsh‚ those are the people I really watched a lot growing up and idolised quite a lot and tried to built my game around them.

“I really analysed those guys and I watched them quite a lot. Those are my heroes.”