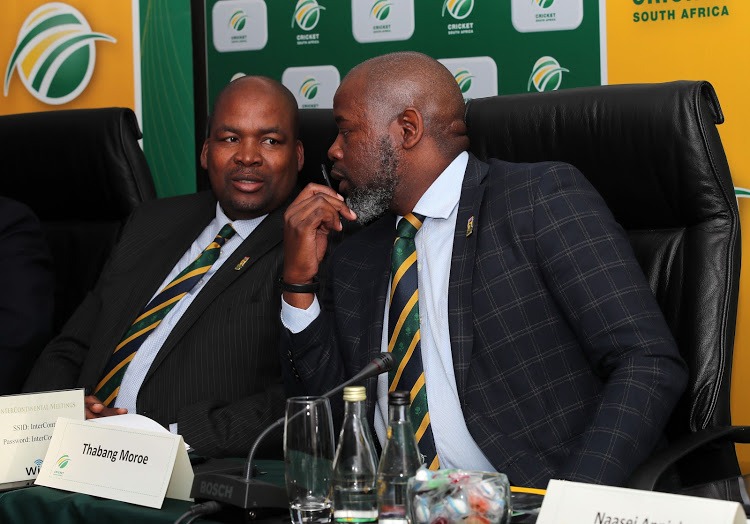 Cricket SA's (CSA) outgoing president Chris Nenzani is aware that suspended chief executive officer Thabang Moroe could take the organisation to court due to the manner in which the process was handled.

Nenzani was reacting to allegations made by Moroe last week that the CSA president contravened procedures of the organisation’s disciplinary code during the process of suspension.

Moroe revealed how Nenzani allegedly flouted clause 11.2.2 of the CSA’s disciplinary codes and procedures when the CSA president suspended him through a phone call on December 6 last year.

He said CSA did not give him an opportunity to provide reasons why he should not be suspended‚ as per the organisation’s disciplinary code.

Nenzani confirmed the verbal suspension on December 6 and that Moroe was only served with a formal letter on January 24.

“Given the situation where the issue with his (Moroe) suspension is‚ it will be not be wise for me to comment too much on the merits and demerits of that suspension‚” said Nenzani when asked if his alleged flouting of the procedures could see Moroe take the matter to court over unfair dismissal.

“The challenge is that you don’t know where it will end.

“Given the fact that as you say the matter may be argued in a court of law and therefore you would not want to sort of prejudice your case at this stage by making public pronouncements‚ but safe to say subsequent to that verbal pronunciation in terms of his suspension‚ he was given a letter (on January 24) which is very clear on what he needed to do.”

According to CSA’s disciplinary code‚ which TimesLIVE has read‚ “CSA will provide the employee with an opportunity to motivate within 48 hours why he or she should not be suspended unless the suspension is motivated by an emergency situation Management will thereafter have a full discretion to decide whether to suspend or not.”

Nenzani did not say if he afforded Moroe an audience to provide reasons why he should not be suspended.

The suspended CEO's lawyer Michael Motsoeneng Bill told TimesLIVE last week that there was no emergency situation to warrant Moroe’s suspension without giving him an opportunity to argue to the contrary.

The CSA president also failed to say if the circumstances surrounding Moroe’s suspension was necessitated by an emergency situation‚ as per the organisation’s disciplinary code‚ thereby giving management a full discretion to decide whether to suspend or not.

“The circumstances at the time demanded a different approach‚” said Nenzani without elaborating.

“But I would not say anything more than that because this matter probably still has to probably go out for arguments at a different level.”

Moroe revealed that Nenzani contravened the rules again when he phoned again in early February to inform him that his suspension would last for six months dating back from December 5 without putting it in writing.

Moroe was put on “precautionary suspension with pay” on what the CSA board said were “allegations of misconduct”.

Nenzani said CSA will receive a report from the forensic auditors on Friday to quantity what could be the alleged misconduct issues that Moroe will have to answer to.