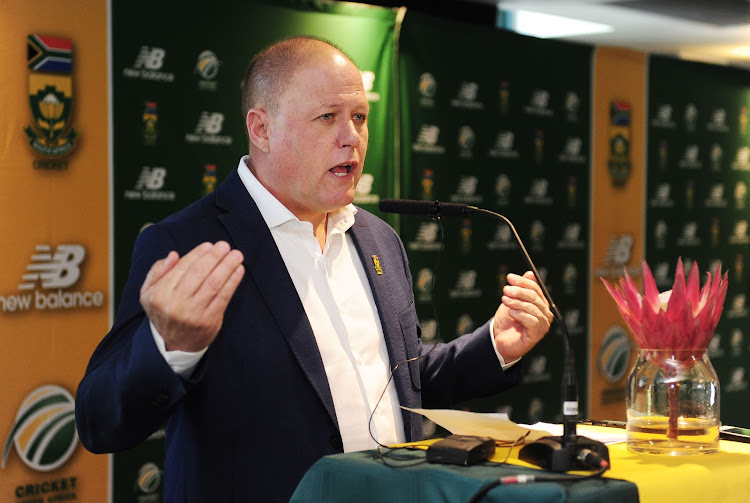 Cricket South Africa head of sales and sponsor relations Clive Eksteen chats to guests and media at Newlands in October 2019 days before he was suspended.
Image: Ryan Wilkisky/BackpagePix

Cricket South Africa (CSA) head of sales and sponsor relations Clive Eksteen was fired with immediate effect after he was found “guilty of transgressions of a serious nature” following a lengthy disciplinary process.

Eksteen was suspended in October last year along with chief financial officer Naasei Appiah and then acting director of cricket Corrie van Zyl in a matter involving players and player contracts through players’ union the SA Cricketers’ Association (Saca).

The trio’s suspension was related to their dereliction of duty following non-payment of player fees stemming from the 2018 Mzansi Super League (MSL).

“The Presiding Officer found Mr Eksteen guilty of transgressions of a serious nature and his relationship and employment with CSA has therefore been summarily terminated (summary dismissal) with immediate effect‚” CSA said on Sunday.

Van Zyl was found guilty of bringing the company into disrepute and given a final warning‚ but has since returned to the CSA.

Appiah and Eksteen did not return and were found guilty for their part.

While Eksteen got dismissed‚ Appiah’s legal representative Thapelo Kharametsane told TimesLIVE last that they appealed and were nearly complete with the appeal process.

TimesLIVE understands Eksteen lost an appeal after he was found guilty following a lengthy disciplinary process.

In announcing the trio’s suspension‚ chief executive Thabang Moroe said the organisation’s decision to suspend the senior managers was to reassure all cricket stakeholders and CSA staff adheres to the highest ethical standards.

Moroe was himself put on precautionary suspension with full pay a month later on “allegations of misconduct” during a chaotic period in December last year.

As many as seven senior executive managers are facing punitive measures but CSA last week committed to finalising its pending disciplinary proceedings including Moroe and chief of finances Appiah.

“CSA assures all stakeholders that the rest of the outstanding disciplinary cases will also be concluded soon‚ so that the situation around these matters can soon be stabilised.

“We view the conclusion of this disciplinary matter as critical for our progression and as a necessary step towards ensuring that CSA enters a new trajectory of firmly focusing on serving the game of cricket.”