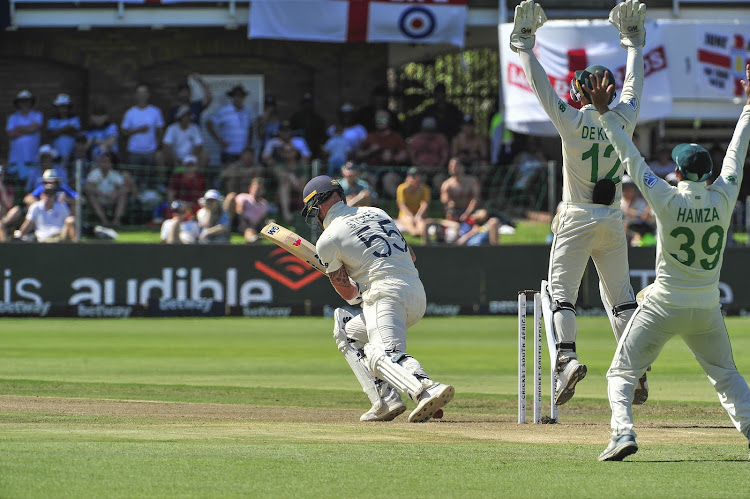 Proteas appeal for LBW against Ben Stokes of England on day 1 of the 3rd test during the International Test Series 2019/20 between South Africa and England at St Georges Park in Port Elizabeth on 16 January 2020.
Image: © Deryck Foster/BackpagePix

The International Cricket Council has allowed for Covid-19 substitutes to be used in Test matches in the event a participant shows symptoms of the dreaded respiratory disease.

In a press release‚ the ICC said the match referee will be able to approve a substitute under the same guidelines that govern concussion substitutes.

This is an important development considering that Test cricket is set to resume in the United Kingdom as the West Indies will be engaging England in a three-match Wisden Trophy Test series.

The first Test will start on July 8 in Southampton‚ but the West Indies are already on their way to England‚ where they will be in a bio-secure environment.

Espncricinfo reported that the West Indies will be based at Old Trafford in Manchester before heading to Southampton where they will prepare for the first Test.

The ICC also confirmed that players won’t be allowed to apply saliva onto the ball when they are shining it. The ICC has allowances for mistakes in the interim‚ but further transgressions will be dealt with by the umpires.

“If a player does apply saliva to the ball‚ the umpires will manage the situation with some leniency during an initial period of adjustment for the players‚ but subsequent instances will result in the team receiving a warning‚” the statement said.

“A team can be issued up to two warnings per innings but repeated use of saliva on the ball will result in a 5-run penalty to the batting side. Whenever saliva is applied to the ball‚ the umpires will be instructed to clean the ball before play recommences.”