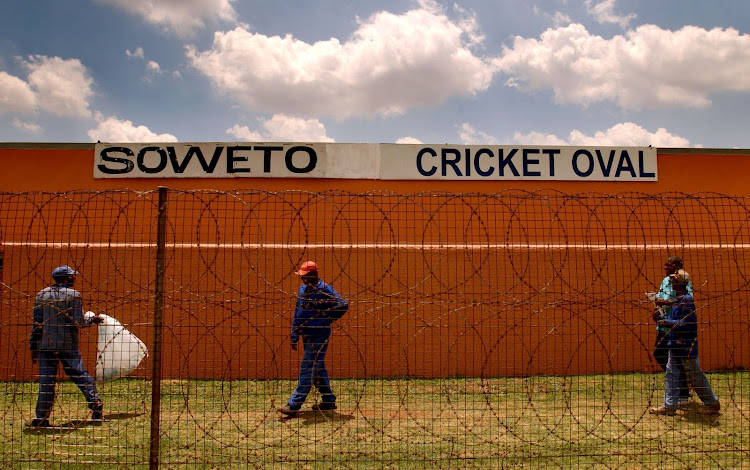 A file photo of the Soweto Cricket Oval ground staff walking the perimeter fence during the warm up match between New Zealand and Gauteng. Soweto-born cricket coach Geofferey Toyana said the ground has not been improved since he stopped playing in 2008.
Image: Nick Laham/Getty Images

Former Proteas bowler Mfuneko Ngam and former Lions coach Geoffery Toyana have bemoaned the lack of transformation and the poor state of cricket facilities in the townships.

Toyana‚ who has won four trophies in his five seasons as the Lions head coach‚ said facilities in the townships have been neglected and are as appalling as they were when he retired in 2008.

Toyana‚ current head coach of the Northerns Senior Provincial side‚ and Ngam‚ the first black African Test cricketer to not have come from a former model C school‚ spoke in a frank interview with Cricket Fanatics Magazine this week.

“The main challenge that we have in every township in South Africa is something that breaks me‚” Toyana told the digital magazine.

“I come from Soweto. It’s quite sad as we speak that the Soweto Cricket Oval has not improved since I last played.

“For me to see that there’s no change and there’s no improvement in that facility and other facilities as well all over South Africa‚” said Toyana‚ the former Transvaal and Easterns man who played 71 List A and 84 first-class appearances during his career as a left-handed batsman.

“It will be a shock for me to see a black African kid coming from the township‚ without any private education‚ go play franchise cricket.”

Ngam‚ who made his Test debut for the Proteas as a 21-year-old against New Zealand in December 2000‚ also retired in 2008 like Toyana and has been coaching in the development ranks ever since.

Ngam agreed that transformation was being misunderstood by many and believes that black players need to be trusted that they too can do the job.

“For me‚ it was all about sitting them down and asking them what they want to achieve. From there you tell them what you’re expecting from them.

“Back in the day‚ guys were not trusted in those positions‚ especially black Africans. For me‚ it’s more about trust more than anything else.