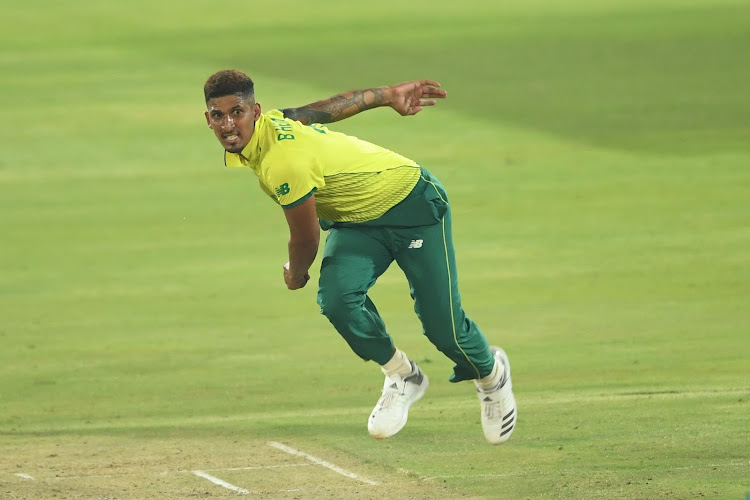 Beuran Hendricks of the Proteas during the 3rd KFC T20 International match between South Africa and Pakistan at SuperSport Park on February 06, 2019 in Pretoria, South Africa.
Image: Lee Warren/Gallo Images

Exciting left-arm seamer Beuran Hendricks has credited his marriage for his recent upward career trajectory that saw him announce his international arrival with the Proteas.

The 29-year-old Cape Town-born Johannesburg-based swing bowler has always been on the periphery of national selection for the past few seasons but never quite cracked it.

His 11 wickets in the SA A side's sweeping win over India A in Pretoria as a 23-year-old in 2013 caught the attention of the cricket world and was seen as one of South Africa’s brightest young bowling prospects.

But a switch to Johannesburg when he joined the Lions in May 2017‚ his subsequent marriage and the birth of his first child gave Hendricks new meaning to life and saw him earn ODI and T20I debuts in 2019.

“It (marriage) has changed my life in a positive way and I feel that it has really calmed me down and made me think about one on one for my future. I can say it (marriage) put me in a right direction‚” said the Bellville Cricket Club product.

Hendricks married his wife Lisa three years ago and they have a son Joshua.

“Before the marriage I was sort of everywhere and I was falling down the wrong line.

“I felt that I made a lot of positive decisions (after the marriage) that benefited me in the end and that got me to where I am now in my game and in my personal life and I feel that I am (now) headed in the right direction‚” said Hendricks.

He arrived on the international stage with a maiden five-wicket haul in the second innings of the fourth and final Test against England at his home ground at the Wanderers in Johannesburg in January.

Hendricks took his first Test wicket when he dismissed Dominic Sibley in the 36th over‚ albeit being a tad on the expensive side after conceding 111 runs in 23 overs.

But he followed that up by ripping through the England middle order in the second innings for his maiden five-for‚ conceding 64 runs in just 15.3 overs.

He said although his Test debut was “pretty special” he got a rude awakening during the match.

“It (Test debut) was just a lot of learning from that stint and that Test match where I felt that at that (international) level you are not allowed to drop your intensity at any moment during the game.

“You are up against the opposition for five days without them giving you any opportunity and I felt I reviewed that quite well.

“During the first match in the first innings I was put under pressure. I was put on the back foot and I felt that during the second innings I picked it up a notch and I picked up my intensity and I was able to bring it back a little bit.

“So a lot of learning from that game and I do feel now that I understand the level of Test cricket and moving forward that is the level I will be at.”