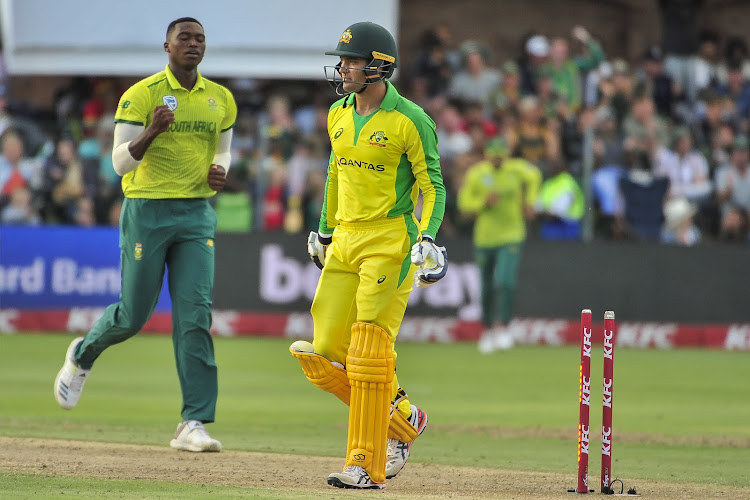 The Proteas quick bowlers will have a skip in their step as they head to Cape Town for the deciding T20 International against Australia at Newlands on Wednesday.

Lungi Ngidi‚ Kagiso Rabada and Anrich Nortje got it spot on in the closing overs to stymie the Australian run-flow in a match the tourists probably should have won.

After Tabraiz Shamsi’s accurate spin (4-0-17-0) strangled the life out of the Aussie middle order‚ the South African trio of express men held their nerve at the death to bowl the team to a 12-run victory after captain Quinton de Kock had made a quick-fire 70 earlier.

The victory squared the series 1-1 and has set up an all to play for decider at Newlands.

Ngidi may be criticised for being too expensive but he does have the knack of taking wickets at crucial times. He has 12 to his name in his last five T20 matches.

On Sunday‚ he took three for 41 in his four overs. He went for 13 in his first but also picked up the wicket of Aaron Finch.

He then conceded 12 in his next.

In his third over he got done for 11 but picked up Alex Carey’s scalp.

Five runs in his last and the wicket of Mitch Marsh left Australia needing 20 off the final two overs with the boundaries having dried up completely.

“You got 24 balls to bowl and the first over doesn’t determine whether or not you’ve won or lost the game‚” Ngidi said in the post-match interviews.

“There were a few unfortunate boundaries that I went for that could have helped.

"But I knew that there was still an opportunity to win the game and I just tried to take as many wickets as I could.”

Ngidi acknowledged the SA attack had been under some pressure to perform.

“It’s been a very difficult build-up for us. There have been a lot of situations where we have been tested at the death‚” Ngidi said post-match.

“The chat has just been to have confidence in the skills we have.

"We have done it before and to go out there and actually back and trust your skills. We knew we had to fight to stay in the series.”

“It’s really nice to get the win. I think after England as well it’s nice to level the series again.

"So we’ve got one to go. It was a really good match and the way Quinny batted at the start really set us up for a decent score.

“The guys really bowled well after assessing the pitch. We stuck to our plans as we went along and that was really good and there’s a great vibe in the team again.”

Nortje had a month’s rest after the Test series against England and came back in Port Elizabeth to claim one for 24 his four overs.

“It was really nice to be out there again. Definitely something I’ll remember going forward.

"It was really good to bowl the last over at St George’s Park and being my home ground it was definitely something special. I’m feeling strong‚ feeling good and ready for the next game.”

Uitenhage-born Nortje‚ dubbed a “proper Dutchman” by bowling coach Charl Langeveldt during the Test series against England‚ said he has been amped during the pre-match warm-up.

“I was ready to run through a brick wall at the start‚” he joked.

“Luckily we batted first and I just relaxed again. It does get the blood flowing a little bit but once you get out there you kind of focus on what you have to do.”

The sides meet in the decider in the Mother City from 6pm on Wednesday.

South Africa's Mignon du Preez celebrated her 100th T20 match by hitting a six and a four in consecutive balls in the final over to power her team to ...
Sport
1 year ago

Proteas team director Mark Boucher said they'd love to have Temba Bavuma back as soon as they can ahead of Sunday’s second T20 against Australia in ...
Sport
1 year ago
Next Article