CSA, relief not in sight 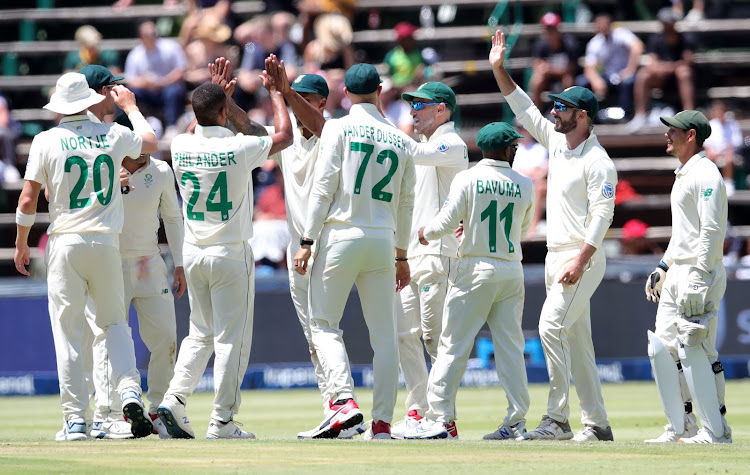 Vernon Philander of South Africa celebrates with teammates the wicket of Jos Buttler of England during the International Test Series 2019/20 match between South Africa and England at Imperial Wanderers Stadium, Johannesburg on 25 January 2020.
Image: ©Samuel Shivambu/BackpagePix

If the road to restoration for the Proteas following their series defeat against England is of the long and winding variety, then the path for Cricket South Africa’s (CSA) boardroom in search of credibility is a similar slog.

Having decided in the first week of December to suspend their chief executive Thabang Moroe and agree to a forensic audit after ‘possible failure of controls in the organisation’, the process has taken an inordinate amount of time to get going.

Only now have the terms of reference been agreed but the service provider who will actually conduct the audit is yet to be determined.

While that process should not be too drawn out, completing the actual review may turn out to be a time consuming affair.

From the moment the review committee convenes it will have 90 days to wrap up proceedings.

“That means we are probably looking at wrapping this up in May only,” a CSA insider told me.

Asked whether the terms of reference gives the review committee sufficient scope to fully interrogate the allegations the source said: “I suppose that is the difference between a proper forensic audit and a review. The one would specifically deal with scratching and digging more and that is what we are hoping to achieve here.

“It will certainly look at things like irregular spending and mismanagement. I think the idea is to be quite comprehensive,” the source said.

If restoring credibility through a thorough forensic at CSA takes a little longer, then so be it. As is so often the case however, the same luxury doesn’t apply to on the field matters.

There will be much soul searching in the wake of the national team crashing to their third successive Test series defeat this week. Graeme Smith, still fairly new in his job as director of cricket will have to implement a turn-around strategy that meets immediate demands but also serves as long term agenda.

Smith and the coaching staff may have vast cricketing experience but they are yet to find their feet in their respective positions. It also doesn’t help that the team is in transition with several new faces introduced over the last while, captain Faf du Plessis going off the boil and that premier bowler Kagiso Rabada unnecessarily getting himself suspended.

One of the short term solutions suggested to Smith is to engage the England Cricket Board (ECB) so that South African players with Kolpak contracts again become eligible for the national team. The argument has merit when you accept that keeping the top talent in the country is a near futile exercise.

Rugby embraced the concept of involving foreign based players and it benefitted hugely at last year’s Rugby World Cup as a result.

Finding longer term solutions may be harder to come by for Smith. He needs to interrogate if the money spent on developing players are prioritised in the way it ought to be, and he will have to introduce systems that will fast track black talent into the Test team. Unearthing black batters in particular has to be prioritised.

Smith knows all too well, nothing smooths the path to the Test arena like the sheer weight of runs. The director of cricket is going to have his hands full.