The left-handed Bird also failed against Afghanistan, but also came good with 54 against Canada and 43 against the United Arab Emirates 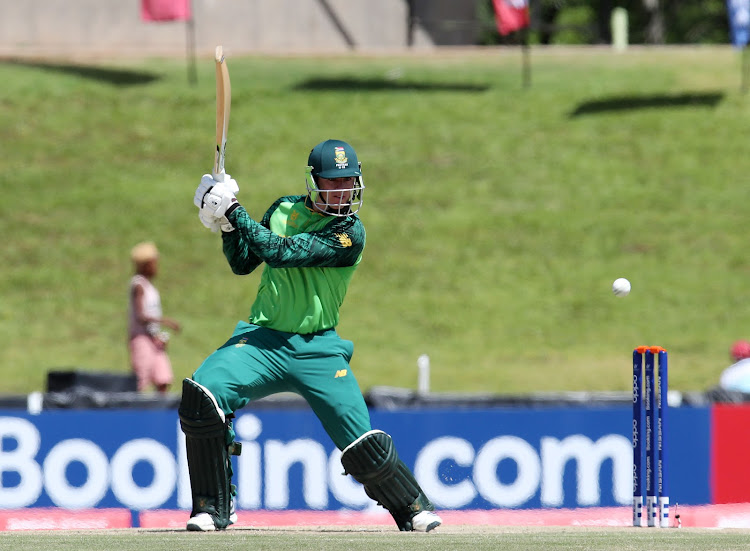 SA U-19 opener Jonathan Bird is recognised as one of the brighter batting talents in the team, but that's an honour he's shipping off to his teammates Bryce Parsons and Luke Beaufort.

There have been plenty of questions in regards with the flaky nature of SA's batting in the ongoing ICC U-19 Cricket World Cup and their batting issues were exposed in the heavy opening game defeat against Afghanistan.

In the subsequent wins against Canada and United Arab Emirates, captain Parsons and Beaufort, in particular, have been more than happy and willing to shoulder the burden of the run-scoring.

The left-handed Bird also failed against Afghanistan, but also came good with 54 against Canada and 43 against the United Arab Emirates.

Bird felt that his teammates, who bat at numbers three and four respectively, will continue in the same manner when they play Bangladesh in their Super League quarterfinal in Potchefstroom on Thursday.

"They've been batting extremely well and in one game against the United Arab Emirates, they got a 150-run partnership,” Bird said.

Bangladesh were on their way to being well beaten by Pakistan in their Group C encounter, but big wins against Zimbabwe and Scotland meant they topped the group on net run-rate.

Bird said they're dangerous with an offspinner who can derail them on Thursday.

“We watched videos of them for more than an hour and a half. They've got a very good offspinner who's been trapping batsmen on the back foot with leg-before decisions or bowled.

"I know how they're going to try to get us out by attacking the stumps,” Bird said.

“We're going to try to negate that by getting fully forward and committing to our shots.”

Bird admitted that consistency hasn't been part of their armoury. However, he said they've gained plenty of confidence from their previous two group stage wins.

“We've had a very up and down tournament where we've lost one and won two matches. We're going into this game with confidence though as we've put 300 on the board in the other two games. We're looking to do that yet again,” Bird said.

England completed a comprehensive 3-1 series win on the fourth day of the fourth cricket Test here on Monday.
Sport
2 years ago

Proteas speedster Kagiso Rabada believes that keeping him cotton-wooled for the forthcoming limited overs leg of the England tour was a smart ...
Sport
2 years ago

South Africa suffered a huge blow on the cusp of lunch on the fourth day of the fourth cricket Test against England on Monday.
Sport
2 years ago
Next Article