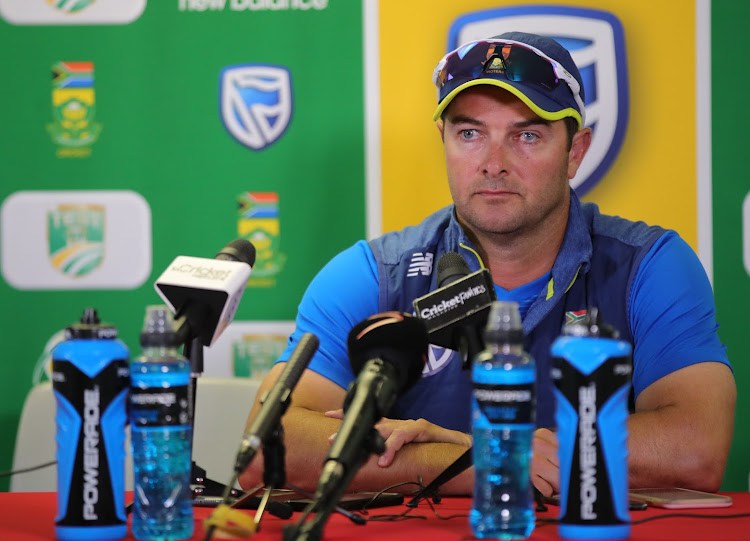 SA coach Mark Boucher speaks to the media at the Wanderers end of day's play on January 26 2020.
Image: Samuel Shivambu/BackpagePix

He admits confidence is low but insists that South Africa should not lose hope of winning the fourth Test and forcing a drawn series against England.

South Africa’s coach Mark Boucher acknowledges‚ however‚ that chasing down a world record victory target of 466 with two days left to be played is a tall order.

The fact that six sessions remain should give the batting side who has to win something to aim at.

“If you look at the amount of time left in the game we’ve still got to look at going for a win‚” said Boucher.

“It’s never been done before but we have to hold on to some positivity. But that’s what Test cricket is all about. It’s about going through tough times and stepping up when required.

“It’s a new ball wicket. It goes around for about 30 overs‚ but then the ball gets softer and strokemaking gets easier. We don’t have to be flashy‚ there is a way and means to go about getting 450.

“You saw in the field the guys tried really hard‚” said Boucher about the South African effort that saw England bowled out for a modest 248 in their second innings.

“We’ve got the fight back‚” said Boucher.

He confirmed that Vernon Philander‚ who was forced from the field just nine balls into his first spell after suffering a grade two hamstring tear‚ will be able to bat.

“I believe he has got a grade two tear‚" he said.

"I'm sure that Vern in his last innings will definitely go out and bat and try and add value to the team.”

Philander will be out for at least four weeks but should be fit in time for the start of the County Championship.

He concluded a three-year deal to play for Somerset on a Kolpak contract.

It was an eventful day for Philander.

Earlier on Sunday news broke that he had been handed a demerit point and fined 15 percent of his match fee for the abusive language he used toward Jos Buttler.

The England batsman‚ who was sanctioned for using similar language towards Philander at Newlands‚ had been dismissed by Philander when the burly fast bowler directed his fiery invective.

Stokes fined by ICC after foul language rant at spectator

England all-rounder Ben Stokes was fined and given a demerit point by the International Cricket Council (ICC) on Saturday after a foul-mouthed row ...
Sport
2 years ago

Proteas speedster Kagiso Rabada believes that keeping him cotton-wooled for the forthcoming limited overs leg of the England tour was a smart ...
Sport
2 years ago

Vernon Philander’s final Test has taken a few turns for the worst.
Sport
2 years ago
Next Article