SA dismissed for 183 at lunch on third day, England opt against enforcing follow 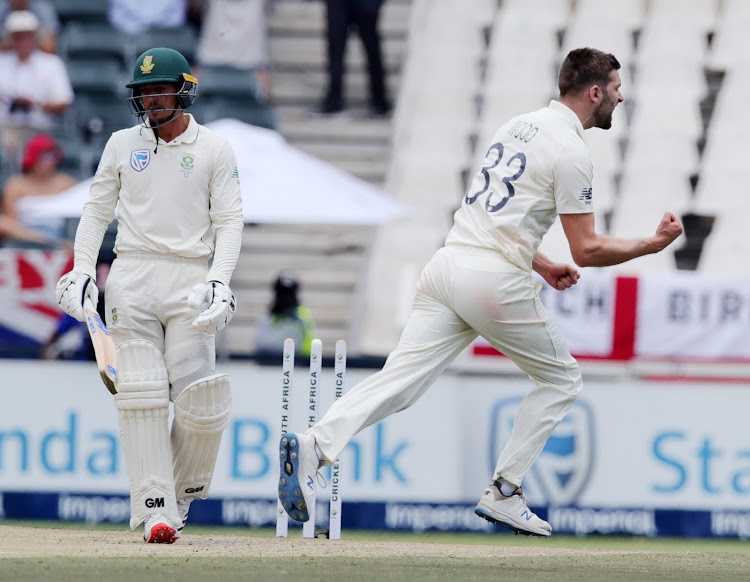 South Africa was dismissed for 183‚ 17 runs short of the follow on total at lunch on the third day of the fourth Test against England on Sunday.

England have opted not to enforce the follow on.

Although Quinton de Kock (76) and Dwaine Pretorius (37) vainly tried to stem the England tide‚ the sins committed in the South African first innings on Saturday ultimately caught up with the home side who have to win this Test to level the series.

Having started the day on 88 for six South Africa took some positive strides towards avoiding the follow on.

First though they suffered a setback.

They were still 113 shy of that total by the time Vernon Philander took guard. He didn’t stick around very long in the first innings of his final Test.

It took England just four minutes to break through on the third morning with Philander scooping the ball to Stuart Broad at mid off‚ off Chris Woakes.

De Kock who was 32 not out overnight dug in.

He went to his 21st Test half century off 72 balls and shared in a 79-run stand with Pretorius for the eighth wicket.

Pretorius had helped himself to seven boundaries and appeared reasonably at ease before he edged to Zak Crawley in the gully for 37.

His dismissal was slightly unexpected and he pondered his plight for a few moments before setting off on his long walk back.

If that wicket arrived a little out of the blue then De Kock’s dismissal came as a bolt of lightning on the cusp of lunch.

He was bowled through the gate with his off stump knocked back by Mark Wood operating at lively pace from the Corlett Drive End.

As is often the case with De Kock he had looked comfortable and entirely at ease building up to his demise.

As the ninth wicket to fall‚ his dismissal just before the break also meant that lunch would be delayed.

England didn’t have to wait long however as Wood completed his second career fifer when he dismissed Dane Paterson.

Wood finished with five for 46 in a South African first innings in which the ball very much held sway.