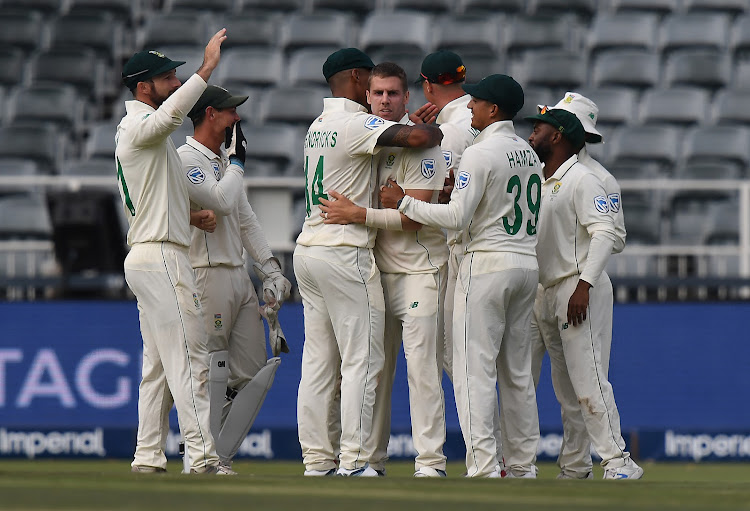 Anrich Nortje celebrating his wicket with team mates of Ben Stokes during day 1 of the 4th Test match between South Africa and England at Imperial Wanderers Stadium on January 24, 2020 in Johannesburg, South Africa.
Image: Gallo Images

Just when it looked like South Africa’s quest to level the Test series was slipping from their grasp‚ the bowlers timeously found their mojo here on Friday.

When bad light stopped play on a rain interrupted opening day of the final Test‚ England had reached 192 for four in their first innings.

They will be disappointed with their effort after lunch but Faf du Plessis’s team deserve kudos after losing their way in the belated opening session.

It is to the South African attack’s credit that they clawed their way back into the contest later in the afternoon.

Having looked rather benign before lunch the hosts’ were baring teeth as the shadows lengthened.

Anrich Nortje and even debutant Beuran Hendricks found the pace and at times accuracy that made batting a tricky exercise in fading light.

It took some force to swing the momentum away from England.

The tourists had been sitting pretty and looked largely untroubled before lunch.

Openers Zak Crawley and Dom Sibley negotiated that period with aplomb and reached the first significant break with England on 100 without loss.

The South African attack had failed to use the new ball effectively and to captain Du Plessis it was soon clear that his front line bowlers weren’t having the impact he had desired.

In fact‚ by the 18th over there was the mildly unedifying sight of South Africa’s fifth bowler Dwaine Pretorius gliding in from the Corlett Drive End.

By the 23rd over he had changed ends but he went for three boundaries.

Sure Du Plessis was without Kagiso Rabada who is serving a one-match ban‚ but the attack that was deployed didn’t produce the zip and zing one would have expected in seam friendly conditions.

The morning session had after all been curtailed due to soft persistent rain and a wet outfield.

Vernon Philander on the occasion of his last Test‚ failed to find the movement that made him a bowler held in such high esteem. Similarly‚ Hendricks at the opposite arc in his Test career‚ also failed to shape the ball in the way he intended.

Moreover‚ South Africa’s decision to go into the Test without Keshav Maharaj limited their options.

It didn’t help that a few catches were grassed and that Sibley was caught off a no-ball.

None of those reprieves became too costly as the South Africans adopted a more focused approach after the first long break.

Hendricks‚ who came around the wicket from the Golf Course End‚ strangled Sibley who was familiarly sedate and luxuriated in the ineffectiveness of the South African bowlers earlier in the day for 44.

Crawley nicked off to Rassie van der Dussen at first slip for 66 and although it was his maiden half century‚ the opener must have felt something significantly more substantial was on the cards.

Joe Denly batted like a man on a mission and was dropped twice before he too was caught at first slip by Van der Dussen off Dane Paterson for 27 off 35 balls.

Nortje‚ who is apparently carrying a bit of a niggle‚ seemed to come back from the lunch break with a spring in his step.

His first spell went for 16 runs off just two overs‚ his second 14 off five.

He ran in with more intent in his third spell and picked up the near priceless wicket of Ben Stokes with a 146km/h thunderbolt.

Stokes contributed just two with England on 157 for four.

The South Africans will be pleased with their effort in the late afternoon but with England captain Joe Root and the gifted Ollie Pope at the crease they need to make a sprightly start on the second morning if they are going to level the series.