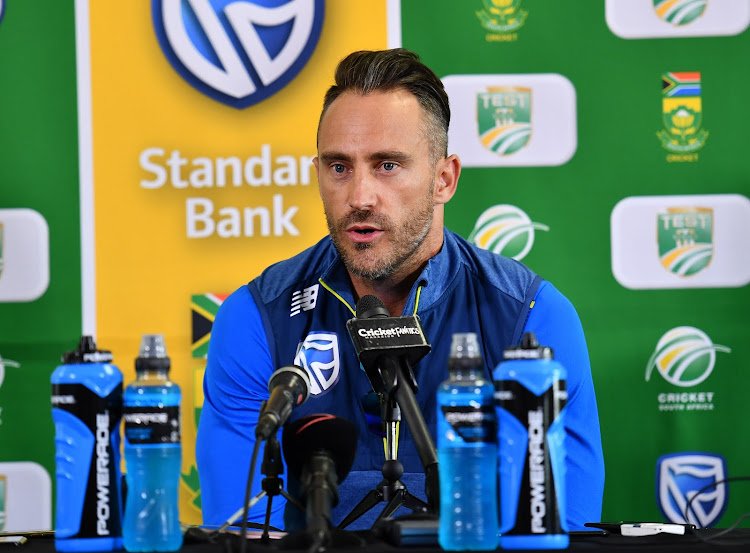 Faf du Plessis says he is going nowhere - at least not until after the conclusion of the T20 World Cup later this year.
Image: Ashley Vlotman/Gallo Images

Proteas skipper Faf du Plessis on Monday reiterated he has no intention of retiring from Test cricket just yet despite calls from some quarters for him to do so.

Du Plessis knows the “outside noise” calling for him to step down will gain even more momentum after the Proteas were thrashed by an innings and 53 runs in the third Test against England at St George’s Park in Port Elizabeth on Monday.

But he said he would only be considering his future in red ball after the T20 World Cup being played in October and November this year.

“I’ve heard there are lot of rumours about retirement‚” Du Plessis said at the post-match media conference.

“I think I have been pretty clear regarding that. I have committed myself to Cricket South Africa until the T20 World Cup.

“There isn’t a lot of Test cricket left this year.

"One massive Test match (in Johannesburg this week) where we need everyone as strong as possible to try and draw the series and then after that there is quite a big gap until the two Test matches in West Indies. Then the rest of the year is white ball stuff. “

Du Plessis is all for some new faces captaining South Africa in white ball cricket this year.

“I’ve also said before there’s an opportunity then to release some of that captaincy when it comes to giving guys opportunities‚ especially in one-day cricket so that there is planning and purpose for three or four years down the line.”

“For me now‚ it’s just about being as mentally strong as possible. We need our leaders in our team and we need our senior players to be strong. It’s a tough time for all of us and we need to make sure we fight.

“There’s no running away from it. I’m the leader of the team. The worst thing a leader can do is pull the plug mid-series and say ‘sorry boys‚ but I’m out‚ I’ve had enough’.”

The 34-year-old veteran of 64 Test matches admitted the criticism of his lack of runs had been “chipping away at him".

“I try to block it out as one should do. Obviously‚ myself and everyone else in the dressingroom are not robots and (the lack of) confidence in our batting line-up is a big thing.

“We need to get confidence back and we need time in the middle and runs on the board. For me it’s about being as mentally strong as a I can and try to block out all the noise.”

“We made huge strides in that first Test match‚ I think mostly from a confidence point of view. I felt like we turned the corner as a team.

"And then the last two Test matches‚ obviously fighting in the second one but then to feel like we taking a little step backwards on this third Test‚ especially from a batting point of view.”

There’s a quick turnaround now with the Wanderers Test starting on Friday‚ leaving the selectors very little time to come up with what they think would be the right combination to tie the series.

It is likely that Bavuma will come in for Zubayr Hamza and Hendricks could make his Test debut in the place of banned quick Kagiso Rabada.

They will also need to decide if they want to give Petersen a run.

“A guy like Temba Bavuma got runs. We asked him to go and get runs and he responded‚" he said.

"So we must look at how we get Temba back in the team because we are short of confidence in our batting line-up.

"There will once again be pressure on everybody to perform.”

The final Test squad is:

SA’s tail displayed some fight on the final morning but the hosts still ended up crashing to an embarrassing innings and 53 runs defeat at the hands ...
Sport
2 years ago
Next Article