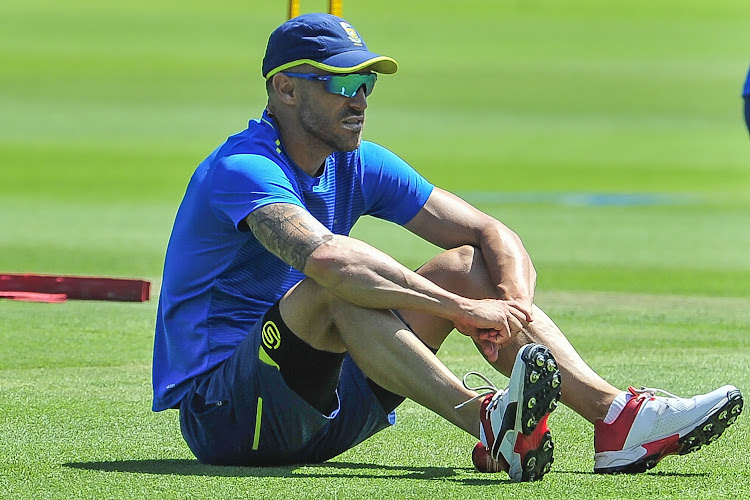 Faf du Plessis will be desperate for some runs to inspire his team.
Image: Deryck Foster/BackpagePix

Another week brings another mouthwatering cricket contest‚ but with the combatants in England and SA having won one each‚ there's plenty at stake in the third Test that starts in Port Elizabeth on Thursday.

Here are the five factors that could influence the third Test between SA and England at St George's Park.

The St George's Park pitch is a reliable one and the ground has a very good curator in Adi Carter.

However‚ the Newlands pitch‚ which lasted the full five days and went through all the characteristics of a Test surface‚ raised the bar significantly.

A good cricket wicket‚ one that Newlands provided‚ suits all teams and produces gripping cricket.

Having not hosted an England Test in 16 years‚ St George's Park needs a pitch to justify why they deserve this big fixture.

SA's east coast has some weird weather vagaries that seem to flare up when cricket takes place.

When the wind comes in from the interior‚ it dries out the pitch‚ brings in warm weather and the batsmen generally have fun.

When the wind comes in from the sea‚ the bowlers delight but it also brings in the rain.

With no significant weather interruptions‚ the last thing such an important Test match needs is rain‚ even though its much needed in the Eastern Cape.

Du Plessis needs runs and a lot of them‚ even though he's able to keep his place as captain.

He hasn't scored a Test ton in more than a year and hasn't crossed 30 in his last seven innings.

Those are grim numbers for a man who has to be the lynchpin of SA's inexperienced middle-order batting.

There were runs above and below him in both Tests‚ but his runs and stickability were sorely missed in Cape Town.

Both will be needed as the team can't be carried by the juniors in Pieter Malan and Rassie van der Dussen.

Dean Elgar scratched his way to priceless runs while Quinton de Kock is in form despite his careless dismissals in both Tests.

The man is a force of nature. He knows it.

Joe Root knows it and so does SA.

They need to find a way to neutralise him and how they do so will be critical to their fortunes in Port Elizabeth.

He turned the game in Cape Town with the bat‚ ball and in the field.

He can't be kept out of proceedings and South Africa have to find a way to do so.

SA's senior players failed dismally in this regard.

While Elgar admitted his first innings‚ just like Du Plessis did with his match-deciding second innings brain-fade‚ the senior batsmen lost their heads when the team needed them to remain calm.

They owe the team runs and improved decision-making after their gaffes.

De Kock is also included in this group as he was one of the senior who's nerve was found wanting in the tense and epic second innings at Newlands.