Faf du Plessis: 'I’m not getting into a battle between myself and Temba' 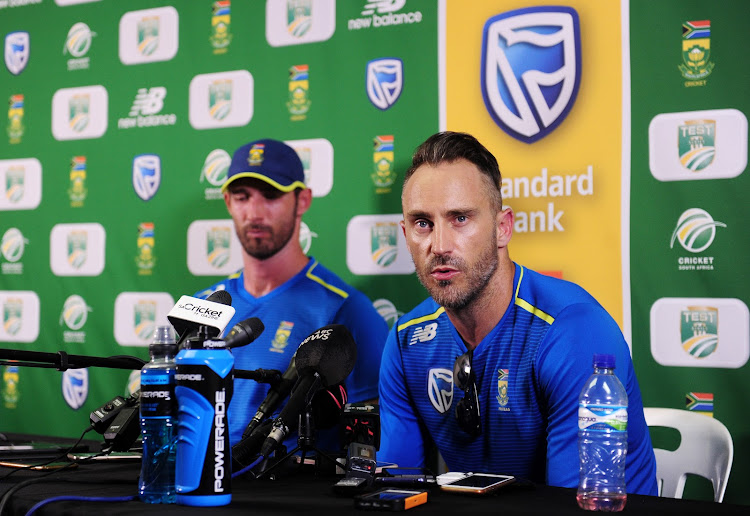 Faf du Plessis will be feeling the heat when SA face England in the third Test starting at St George’s Park in Port Elizabeth on Thursday.

The Proteas’ second highest scorer of 2019 has had a lean time of it of late with the bat managing only 69 runs in his four innings against the tourists.

The 35-year-old will not be worried about losing his job just yet but he will have gotten wind of the debates raging on social media regarding his form.

Some believe he should suffer the same fate as axed Temba Bavuma.

If there is one venue Du Plessis could have picked to grind out an innings of consequence and prove his detractors wrong it would be St George’s Park‚ where he averages 72.71 across six Tests.

And if South Africa are to take an unassailable 2-1 lead heading into the final Test in Johannesburg‚ they will need their skipper to fire this week.

Speaking at his captain’s media conference on Wednesday‚ Du Plessis said “outside noise” would always be a factor but he admitted the need for him to score runs.

“You get used to it when you’ve played international cricket for as long as I have‚” said the veteran of 250 matches for SA.

“It comes with media for you and media against you.

"It’s really important for any player not to get sucked into it too much.

"The difference between players who played for a short time and a long time is how they cope with the pressures that come with it.

“I’m not getting into a battle between myself and Temba as to who plays and who doesn’t. My performance also needs to up in terms of scoring runs.

“Temba has been put in a position where he needs to score runs to get back into the team and if he does that he will.”

SA will need to achieve something this week they could not in Cape Town and take 20 English wickets.

Du Plessis spoke of how reverse swing could play a role if the heat levels remain the same and the ball is scuffed sufficeintly with the help of an adjacent‚ bare pitch.

For that matter‚ they are caught between whether to sacrifice the allround capabilities of Dwaine Pretorius or to bring in another quick bowler in Dane Paterson.

“(One needs to consider) the nature of the ground‚ the conditions here and the style of bowling that can work at St George’s. But if you do that you are going in with one less batter or spinner and there is merit in both.

“You need a spinner at St George’s and you also need a longer batting line-up. It’s not an easy decision but those are just the options on the table.

“It’s about looking at the conditions and seeing what do we need to take 20 wickets.”

England arrived at the country’s oldest Test venue in the best of spirits and well-rested following their 189-run victory at Newlands.

ICC Player of the Year Ben Stokes will once again be key to their success.

He has single-handedly won games in the last year and South Africa will need to work out a way to counteract his skills set.

England also have a poser as to who will replace injured James Anderson.

Mark Wood and Jofra Archer are the frontrunners but that selection dilemma is not as complicated as SA’s.