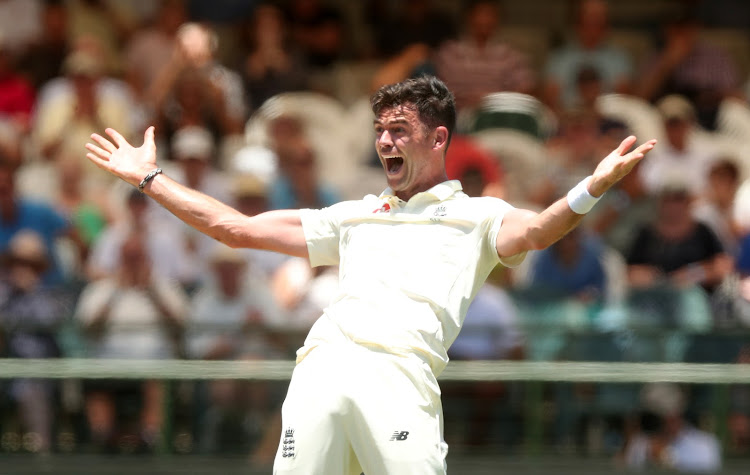 England's James Anderson celebrates a wicket before the decision is overturned on day five of the second test against SA in Cape Town on January 7 2020.
Image: REUTERS/Mike Hutchings

England have a fresh injury worry as experienced spearhead James Anderson could be a doubt for next week’s third Test in Port Elizabeth.

Anderson‚ who steamed through 37 overs at Newlands and 33 in the first Test at SuperSport Park in Centurion‚ only bowled two overs after lunch because of a side injury.

The heat of the match-saving action and Joe Root’s extensive use of the spinners meant Anderson wasn’t required and spent time off the field.

However‚ the issue remained when he returned later in the game and wasn’t used after that.

The 37-year-old bowled extremely well in the first innings with his 5/40 being his 28th Test five-wicket haul.

However England have fresh fast bowling reserves in Jofra Archer and Mark Wood set to be ready for action next week after recovering from their respective short and long-term injuries.

There’s also Chris Woakes and Craig Overton to call on in the need to keep Anderson in cotton wool.

“We’ll have to see. He’ll go for scans‚ get some treatment and see how he pulls up for PE‚” Root said.

“It’s his side‚ but it could be just a little niggle. We’ll have to wait and see.

“It could be a 24 to 48 hour kind of thing or it could be something else. We’ll have our fingers crossed and hope it’s not another casualty of this tour.

England’s tour has been beset by injuries with Archer missing the second Test with an elbow issue while opener Rory Burns is out of the tour and will miss England’s forthcoming tour of Sri Lanka after undergoing surgery on the ankle he injured on the eve of the Test.

Cricket SA have moved swiftly to reiterate their support for four-day Test cricket after a news report claimed that they were not in favour of the ...
Sport
1 year ago

The wait between James Anderson's 27th and 28th Test five-wicket haul was only six matches.
Sport
1 year ago

Proteas team director Mark Boucher has been on the receiving end and part of record fourth innings run chases over the years.
Sport
1 year ago
Next Article