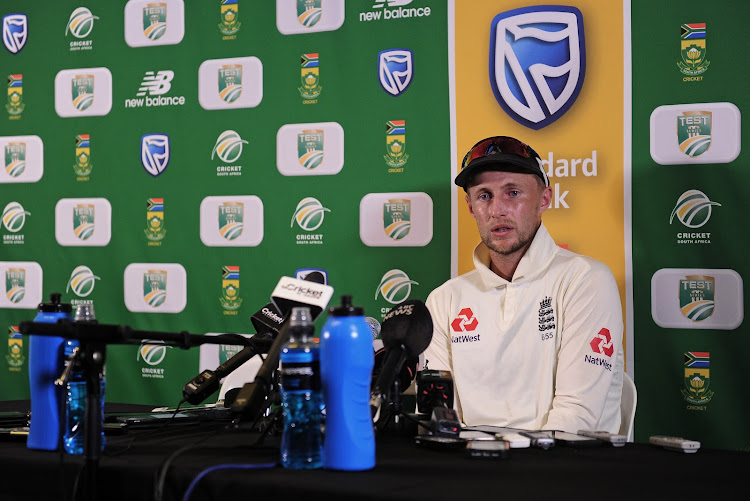 Joe Root of England is interviewed after day 5 of the International Test Series 2019/20 match between South Africa and England at Newlands Cricket Ground, Cape Town on 7 January 2020.
Image: © Ryan Wilkisky/BackpagePix

In becoming the first team other than Australia to win at Newlands since John Reid's New Zealanders in 1962‚ England captain Joe Root knew he had one person to thank for the landmark triumph: Benjamin Andrew Stokes.

The all-rounder is no stranger to success at Newlands.

In his first visit here in 2016‚ he hit the leather off the ball in an exhilarating 258 that remains the fastest 250 in Test history.

That game was drawn.

His 2020 incarnation may have scored less runs but he had an even bigger impact in England's first win at this ground since 1957.

A first innings 47 wasn't converted because of a soft dismissal‚ from which he responded with five catches in South Africa's first innings to help his side gain a crucial lead.

When England needed a catalyst to jolt themselves towards a declaration‚ Ben was the man yet again with a 47-ball 72 that silenced what remained of South Africa's supporters on Sunday morning and left the faithful Barmy Army in raptures.

Just when South Africa had thoughts of another great escape in the last hour after Joe Denly and Stuart Broad had prised out Quinton de Kock and Rassie van der Dussen‚ he produced a spell of 3/11 that moved South Africa from 237/7 to 248 all out.

It's no wonder that his captain Joe Root called him a “golden nugget”.

“He's a golden nugget. Isn't he? He's just a specimen.

"You put him in a lot of different situations and he stands up to them. He's a born match winner and he'll always put the team first and the group of players alongside him‚” Root said.

“He's a fantastic example to a young squad of player that we have here. When you throw him a ball and he gives you an eight over spell like that and to win you a game after playing the way he did with the bat.

"There's not many teams that have Ben Stokes in them. We're very lucky to be witnessing what we are at the moment.”

Just before lunch‚ a fielding change and a loss of concentration from Root's opposite number Faf du Plessis led to a wicket.

After tea‚ an overly aggressive field forced Quinton de Kock into an error that lead to a wicket.

Such was the scoreboard pressure of chasing 438‚ England always had the leeway of making changes to force a wicket.

Root said he hoped it was the pressure they exerted that led to a wicket‚ but also praised his team's character for staying in the game until the end.

“I'd like to think it's the pressure that we put them under.

"It can be quite a tricky situation that you find yourself in as a fielding side when you keep changing the field and the bowlers.

"That makes it difficult for batters to feel settled and play one mode of cricket‚” Root said.

“I'd love to think to think that it was our skill that got them out.

"It was a pleasing performance and I thought we've played well all week. The way we went about it all week‚ built pressure at the right times and showed a lot of patience. Character went into that last session to keep believing when the chances came.”