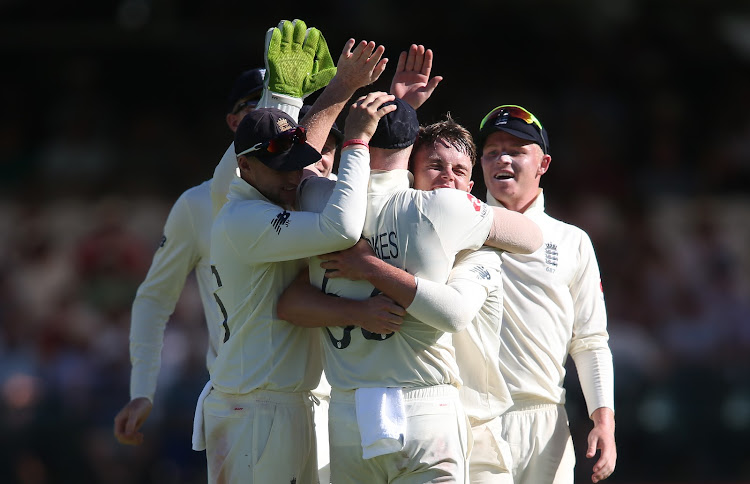 This will go down as a comprehensive 189-run win for England and their first at Newlands since 1957, but South Africa made England sweat for it.

Through their indestructible all-rounder Ben Stokes (3/35) who cleaned up the tail, England bowled South Africa out for 248 with nine overs left.

At tea, South Africa were 225/5, but in continuing a trend in the game where wickets have tumbled in the final session, England bided their time and went for the kill when it counted.

19 of the 38 wickets that fell tumbled on the final evening. For the hosts, it happened twice on the second and fifth evenings. It's the narrow margins of composure that separated the teams.

In scoring 44 runs of 156 balls in the first session and 55 off 192 in the afternoon one, crease occupation was the name of South Africa's game.

Four partnerships stretched over 100 balls, a remarkable show of defensive tenacity from the hosts, who never looked like wanting to chase the 438 needed to win.

They were far from perturbed by being starved of runs. Their oxygen was batting time while keeping England on the field for as long as they could.

That they took the game into the final evening was testament to the character of the junior players in particular.

Pieter Malan's application in his 369-minute, 288-ball 84 smacked of a man who knew how to bat time without the pressures of scoring runs.

Maligned in the domestic circuit for his inability to dominate bowling attacks like his flamboyant and attacking younger brother Janneman, Pieter showcased the value of crease occupation under pressure at international level.

Until Sam Curran (1/37) got him with one of the few balls that misbehaved on a good length at the Wynberg End, he was error-free and stoical.

With only two fours, he was minimal of risk and maximum in terms of effort of staying at the crease.

The same could not be said of captain Faf du Plessis (19) when he gifted his wicket to Dom Bess by slapping his long hop to Joe Denly (2/42) at square-leg.

The timing of the dismissal (25 minutes to lunch) and the manner (hitting a bad ball to a fielder who had just been moved there) wasn't fitting of a batsman who's a noted match-saver, even though his fourth-innings average of less than 31 doesn't inspire confidence.

He's the captain and should have exhibited the care, responsibility and diligence the situation demanded. The same could apply to Quinton de Kock when he middled a Denly long-hop to Zak Crawley at short mid-wicket.

While De Kock had compiled an out-of-character 103-ball 50 during his 66-run, 203-ball, sixth-wicket alliance with Van der Dussen, he was restrained.

England captain Joe Root then moved all the fielders into attacking field positions close to the wicket, playing on De Kock's ego and forcing him to go over to score runs. He picked some gaps delectably, but just after passing 50, he pulled one to Crawley to end the stand.

He sat on his haunches and despaired, knowing full well that one ego-filled mistake undid all of his hard work.

An over later, Van der Dussen's (17) wonderfully stroke less and significant 129-minute, 104-ball knock was ended when he guided a leg-side Stuart Broad (1/37) delivery to James Anderson (2/23) at leg gully.

Vernon Philander (eight) and Dwaine Pretorius (nought) mounted a mini-resistance, but the latter and Anrich Nortje (nought) were prised out in consecutive balls by the indefatigable Stokes.

Philander could and should be held liable for the wickets as he refused to take a single at the end of Bess's over, the 133rd. Like a shark sniffing blood in the water, Stokes circled and went for the kill, like he did with the bat in England's second innings and in the field in SA's first dig when he took five catches. He was the difference between the teams when he claimed Philander to kill the game.