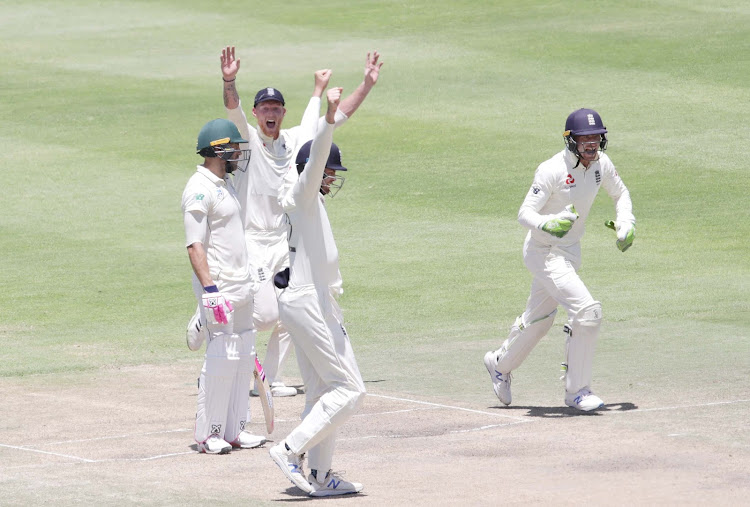 SA lost the vital wicket of captain Faf du Plessis but Pieter Malan remained firm in the quest to hang on for a draw.

Realistically‚ they've got two sessions or 68 overs to get through‚ but they were let down by Du Plessis's shot selection.

With Dom Bess (1/38) getting a fair bit of turn outside the off-stump‚ he forced Du Plessis to play to the on-side.

He forced an error from Du Plessis (19) when he made him sweep hard to Joe Denly at square-leg‚ rewarding England's patience.

Mistakes were difficult to force from Malan (83*)‚ who's 271-ball vigil remains undimmed with two wickets falling at the other end.

RECAP | DAY 5#ICYMI
The afternoon session is underway, with South Africa still needing a further 268 runs to win, with 6 wickets in hand.

While epic match-saving gigs require a central figure‚ they also need partnerships to stretch the game.

Malan now stands as the bulwark that can prevent England from running away with the game while Rassie van der Dussen finds his feet in the pressured environment of saving a game.

Had South Africa not lost Du Plessis's wicket‚ it would have been a success.

Instead‚ it left England with one less wicket to claim over the next two sessions.

With survival being an hour by hour matter‚ South Africa were quite happy to have lost only one wicket before drinks while scoring 20 runs in the 13 overs.

The following 14 overs saw only 24 runs scored by the becalmed hosts.

They also seemed to have got over the Dean Elgar review controversy where he was given out caught behind off Denly on the fourth evening‚ from where he immediately reviewed.

While the ultra edge marker showed a blip when the ball passed his bat‚ his elbow also seemed to make contact with his pad at the same time.

It's already led to a debate on the absence of hot-spot‚ which could have presented a different outcome.

However‚ South Africa battled through the fourth evening to continue their resistance.

Night-watchman Keshav Maharaj (two) had his feet and his mind tied up by James Anderson's (2/23) out and in swingers.

When he was trapped plumb in front 15 minutes after play started‚ it was just reward for England and how they needed to start the day.

Big in-dipper, smacks into the thigh pad and loops to the keeper, no edge confirms the replay and van der Dussen can walk off along with Malan, who continues to impress as is lunch called.#ProteaFire #SAvENG pic.twitter.com/DHGfVPNQiN

They were frustrated by Anrich Nortje in the first Test to a point where the bowler made 40 vital second innings runs that played a crucial role in SA winning the first test.

There was no such from a night-watchman at a sunny Newlands when the sun finally made an appearance after two cloudy days that somehow quietened what was a freakish pitch on the first two sunny days.

As they did late on day four‚ England employed Ben Stokes as their shock bowler to operate from the Wynberg End to find the crack that bothered all the batsmen in the first two days.

He bowled accurately enough to find it‚ but he couldn't coax the same life from it.

The new ball was taken and caused a hairy moment for Van Der Dussen the ball before the interval‚ but the waiting game remains for both teams.

Cricket SA have moved swiftly to reiterate their support for four-day Test cricket after a news report claimed that they were not in favour of the ...
Sport
2 years ago

The wait between James Anderson's 27th and 28th Test five-wicket haul was only six matches.
Sport
2 years ago

Proteas team director Mark Boucher has been on the receiving end and part of record fourth innings run chases over the years.
Sport
2 years ago
Next Article