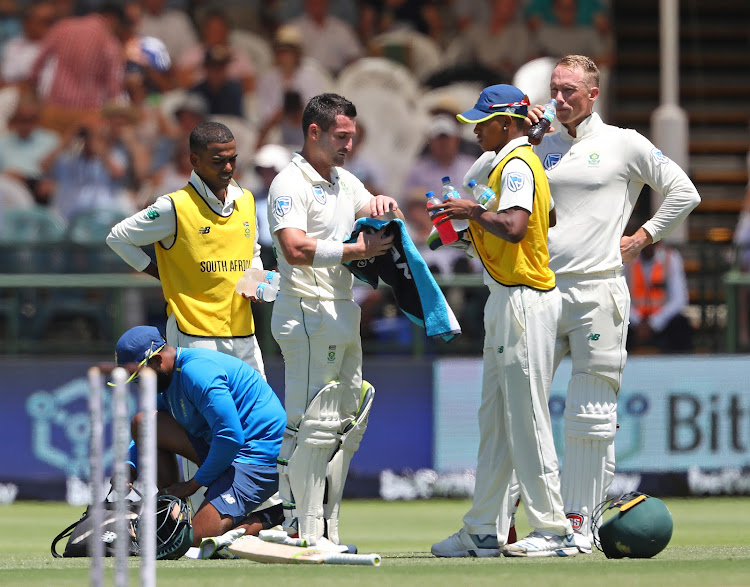 Elgar (77*) and Van Der Dussen (46*) stitched together a 101-run partnership‚ with their 50-run mark being reached off 83 balls. Their 100-run stand came off 222 balls‚ showcasing England's unflagging discipline despite the lack of wickets.

While the pitch remained tricky to bat on‚ especially when England's fast bowlers steamed in from the Wynberg end‚ Elgar and Van der Dussen were resolute in rescuing the team from a potentially perilous 40/3.

The latter‚ in particular‚ lived quite the charmed life. He survived a caught behind off Stuart Broad before lunch when the bowler overstepped when he was on 16.

The normally efficient Ben Stokes‚ who already has two catches in the game‚ grassed him on 43 off James Anderson as England's bowlers probed consistently without the requisite reward.

There also was a chance from Van Der Dussen‚ but the ball dropped narrowly short of Stokes while there also was the leg before decision he overturned.

Elgar had no such complications and raised his 14th Test 50 off 79 balls with seven fours.

Broad was a consistent menace from around the wicket‚ but in his own special way‚ Elgar was able to get behind the line of the ball.

Also‚ the widening crack on a good length the bowlers have exploited from the Wynberg End lingers dangerously outside the right-handers off-stump.

Not that Broad and Anderson didn't worry Elgar‚ but the pitch's growing demons look like they just affect the right-handers.

When Ben Stokes batted fluently on day one‚ he didn't seem to have issues with balls outside off-stump.

Like South Africa‚ England only have one left-hander in their top six to negate the increasingly treacherous crack.

That crack searched Van Der Dussen's technique extensively and in the three times he nicked off‚ the ball pitched in the same area. However‚ England don't quite have the pace in their bowling attack to exploit the softer old ball like South Africa did in the first afternoon and evening where Anrich Nortje was able to make the ball talk.

The second new ball is still 28 overs away‚ but England bowled diligently enough to make sure SA didn't run away with the game completely.

Critically for England‚ they'll probably take the second new ball just before the close of play.

As England showed on Friday‚ it's a tricky time for any team to be batting.

What South Africa have done that England didn't was to have two batsmen who got to 30 and pressed on.