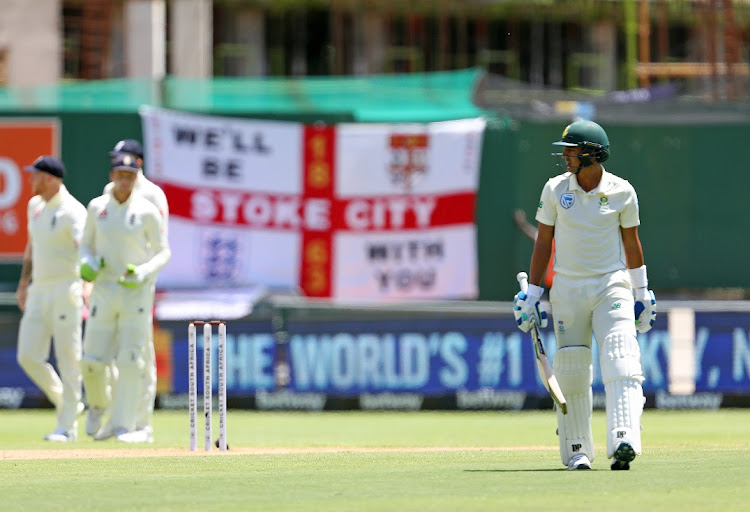 South Africa's Zubayr Hamza walks back to the pavilion after being dismissed for 5 on day two of the second Test against England at Newlands on Saturday.
Image: Carl Fourie/Gallo Images

The sun shone brightly and England's bowlers made hay at the Wynberg End as they reduced South Africa to 60/3 at lunch on the second day of the second Test at Newlands.

Having gauged the best lengths to bowl on what is a misleadingly difficult surface, England's Stuart Broad and James Anderson worked their way through SA's top order as SA's three wickets all fell from that end.

Dean Elgar (35*) survived and for a while, looked to thrive and SA will need him to do both because of the inexperienced and unreliable middle order.

He's now the batting bulwark that stands between England running through the rest of the batting and SA posting a competitive total.

With England totalling 269 after winning the toss, SA trail the visitors by 209 runs, and how SA fare in the afternoon session could have an impact on how the match pans out.

England restarted proceedings from their overnight base of 262/9, but added only seven more runs before Anderson (four) edged Kagiso Rabada (3/68) to Rassie van der Dussen at first slip.

The effervescent Ollie Pope, who was gifted a life late on the first day when Rabada got him with a no ball, was stranded on a well-constructed 61.

Debutant Pieter Malan (5) didn't look fazed in his first outing and his confident back foot punch of Anderson that earned him his first Test runs had a touch of class.

However, Broad (2/12) and Anderson (1/22) aren't quality Test bowlers for nothing and examined him thoroughly with their varied fuller lengths.

Broad was again among the wickets three overs later when he induced an edge from Zubayr Hamza (5) as SA sank to 38/2.

That became 40/3 in the 14th over when Faf du Plessis (1) gave Anderson his first wicket and Ben Stokes his second catch.

With both of England's best bowlers being rotated from the Wynberg End, they bowled that searching fuller length that consistently troubled SA's batsmen.

Van Der Dussen (10*) was one of those who was tested and was nearly found wanting when Paul Reiffel gave him out leg before off Anderson.

Van der Dussen was quick to review and replays showed a big inside edge.

There was no further drama until the interval, but England are fully aware of what the pitch offers them at the Wynberg End.