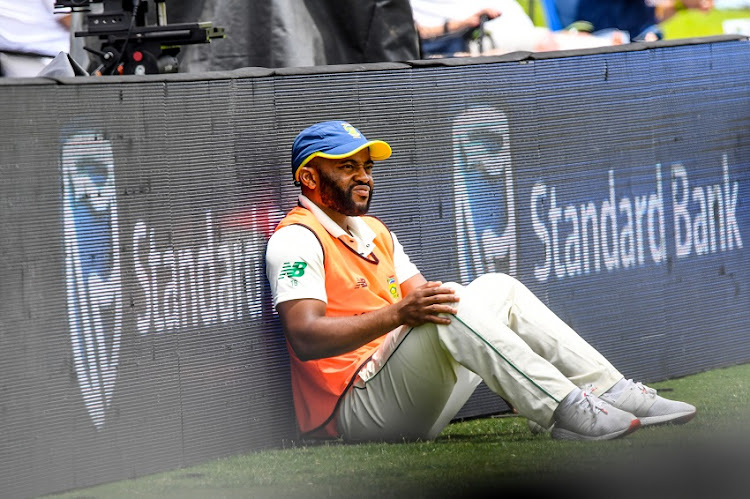 Temba Bavuma of South Africa during day 4 of the 1st Test match between South Africa and England at SuperSport Park on December 29, 2019 in Pretoria, South Africa.
Image: Sydney Seshibedi/Gallo Images

Proteas middle order batsman Temba Bavuma is expected to be left out of the New Year’s Test against England at Newlands this week.

Bavuma missed the first Test 107-run win at SuperSport Park with a Grade 1 hip flexor muscle strain and Proteas coach Mark Boucher said it’s going to be difficult for him to get his spot back.

Speaking after the Centurion win‚ Boucher also gave an indication that Pieter Malan is likely to open the batting with Dean Elgar in the place of injured Aiden Markram‚ who has been ruled for the remainder of the Test series.

“There are challenges at the moment because we have got a few injuries and I am not too sure where Temba stands with regards to his injury‚” Boucher said.

“I know that he still felt a little bit of pain [on Saturday]‚ otherwise we were thinking of maybe using him as a catcher because we know he is a very good fielder.”

In Bavuma’s absence‚ Rassie van der Dussen was handed his Test debut and returned with 57 runs in his two innings.

“We will have to wait and see but if I am honest with you‚ looking at our middle order at the moment it will be very tough to leave out a guy like Rassie.

“He had quite an important knock in this Test match. I understand that Temba has been under pressure with you guys in the media as well because he has not scored a lot of runs.”

If Bavuma is fully fit but is left out of the team in Cape Town that move is likely to draw a lot of criticism from majority of South Africans‚ but Boucher said the Proteas fully understand issues related to transformation.

“He is a very good player‚ I don’t want to throw him to the wolves‚ but we will continue to work with him in a specific way to try and get him to be the best player that he can be‚” Boucher said.

“If an opportunity arises‚ great‚ and questions will not be asked. We understand transformation‚ we need to do a lot of work on a lot of players and Faf [Du Plessis‚ the SA captain] also spoke about Andile [Phehlukwayo] as well.

“Maybe there is an opportunity with all-rounders because I have said that South African cricket has been at its best when we had all-rounders.”

Elaborating on Malan‚ Boucher said it would not be wise to disturb the opening position.

“Pieter Malan was selected as a replacement for a top order batter and for us to go messing around with an opening position won’t be clever‚” he said.

“He has done a lot of good work over a long period of time‚ he has scored lots of hundreds and he knows his game very well. It is at his home ground – at the moment it is swinging towards a swap for an opening Test batsman.”