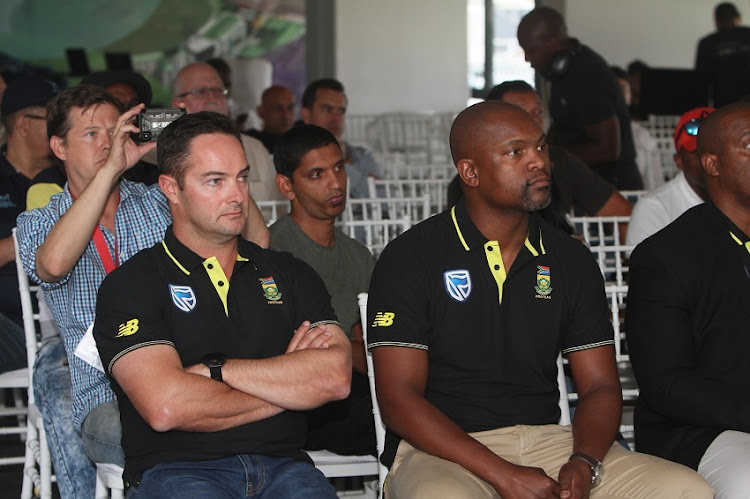 Mark Boucher and Enock Nkwe during the CSA Press Conference at the Newlands,Cape Town on 14 December 2019.
Image: ©BackpagePix

And so the bumper Test season is upon South Africans‚ with England already engaged in a warm-up game against a Cricket South Africa XI in Benoni.

The South African Test and A squads were announced on Monday‚ with the Test squad having six new call-ups‚ with new team director Mark Boucher and company having less than two weeks to find out what works and what doesn’t.

SA A will be up against England from Friday to Sunday while a set of four-day franchise series games take place from Thursday to Sunday. Here are how the six newbies rank and how close they are to a Test debut:

He isn’t the David Warner or Rohit Sharma type of opener most Test teams crave‚ but his type of agenda-setting is the kind that wins Tests. He gets in‚ gets set and goes big. Strike rates shouldn’t be an issue in Test matches‚ but Malan’s been unfairly painted as a go-slow opener.

There are 15 sessions in a Test and each team requires an opener who can bat for at least five of them. Malan’s showed at franchise level‚ especially last season with his 821 runs‚ that he can bat long and bat big. If there’s a berth at the top‚ he has to be the next cab off the rank.

For those who think Van der Dussen is a white ball show pony‚ he once top scored in the 2017-18 four-day competition with 959 runs. That’s top notch batting‚ whichever way you look at it.

The past two seasons have seen less red ball involvement because of his white ball exploits‚ which have landed him in the national team. He was SA’s most composed and best batsman at the disastrous Cricket World Cup. Should he get a middle-order chance‚ which is a possibility now that Theunis de Bruyn has been dropped‚ that composure can and should be transferred to the Test arena.

Second could have and should have made his Test debut in India if it wasn’t for injury. By virtue of being a wicketkeeper‚ he moves to the front of the queue in the event Quinton de Kock needs to relinquish.

While he hasn’t had the same weight of domestic runs as compared to Malan and Van Der Dussen‚ he’s a heavy SA A scorer‚ which counts more in the eyes of the selectors. Keeping duties means he could be employed as a middle to lower-order batsman‚ but he’s an accomplished willow-wielder who can bat anywhere.

Over the past two seasons‚ he’s prove himself to be the best reserve fast bowler. With Duanne Olivier throwing in his lot with a Kolpak contract‚ a spot has opened up and Paterson is best primed to take that up.

He was the best paceman in four-day cricket with 34 wickets last season and has also been among the wickets this season. Anrich Nortje had an unimpressive debut in India‚ but he stands ahead in the queue. Paterson deserves to be here.

Now that he’s shrugged off his injury issues‚ he’s starting to find the rhythm that made him such a flavour of the season. His swing and pace variations collected 32 wickets for him in red-ball cricket last year but‚ like Van Der Dussen‚ he’s already proven himself as a white ball player. SA needs his left-arm pace variations as England struggled with Trent Boult in New Zealand.

Pretorius hasn’t made the same waves as the rest in domestic cricket‚ but has shown enough cricket gumption. As the Mzansi Super League final showed‚ his batting in his stronger suit and can play as a batsman alone.

Whether his pace will be enough to gain a Test place as a bona-fide all-rounder is another story‚ but he’s got the batting goods.