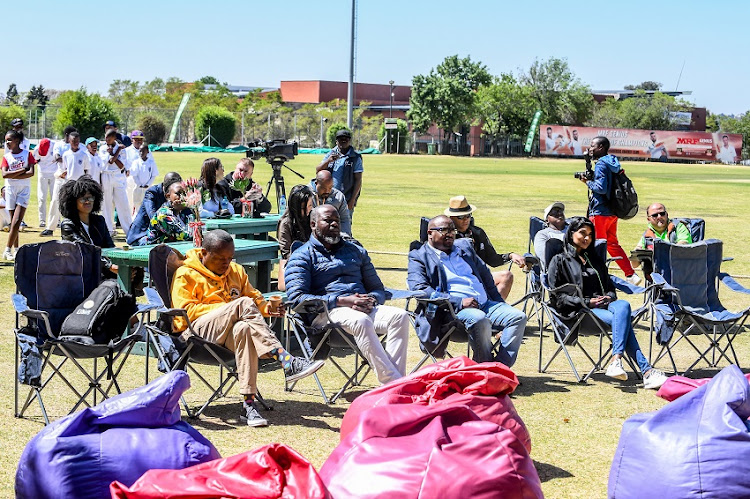 Thabang Moroe (CEO) of Cricket South Africa in the audience during the CSA 2019/2020 season launch at The Wanderers Club on September 26, 2019 in Johannesburg, South Africa.
Image: Sydney Seshibedi/Gallo Images

Thabang Moroe has hinted that Cricket South Africa’s (CSA) search for a director of cricket will continue‚ which means Enoch Nkwe will stay on as team director for the men’s Test series against England.

That would be an understandable‚ even responsible‚ course of action — but it will add to the uncertainty that clouds the game in the country.

Revenue woes‚ too many interim appointees in important positions‚ and the Mzansi Super League failing to capture enough attention are all more prominent discussion topics among cricket-minded South Africans than feats involving runs and wickets.

He told SAFM: “Should we not be in a position to appoint the director of cricket tomorrow [on Friday]‚ then Enoch Nkwe will continue as coach of the Proteas when England comes here.

“But we will need to give him the necessary support.”

“We’ve never had this position before‚ so we’re trying as best as we can to get it right‚” he said.

“Having said that‚ there will be mistakes we make in terms of the appointment. But the one thing we’re not going to do is get rushed into doing this thing.

“It’s a massive appointment and we’re not taking it lightly.

“We’re brainstorming around this issue on a daily basis with the board. It’s in the best interests of CSA that we take our time and appoint the best person for the job — almost a perfect fit.

“Somebody who will understand the cricket side of things and the business side of things because that will be just as important‚ commercially‚ for us. A person who also understands the administrative part of the game.”

Graeme Smith was‚ TimesLIVE understands‚ the leading candidate until he announced his withdrawal last Friday — what Moroe seemed to refer to when he said‚ “The unfortunate incident happened last week.”

Smith posted on social media that‚ “… despite my obvious desire to make a difference during the long and‚ at times‚ frustrating process over the last 10 or so weeks of discussions‚ I have not developed the necessary confidence that I would be given the level of freedom and support to initiate the required changes”.

What would the position entail?

“His powers would begin and end with him appointing the manager of the team‚ previously termed the coach‚” Moroe said.

“The team director‚ being the coach‚ then takes over and compiles who he feels should be their support staff and how they’re going to run that team.

Perhaps that wasn’t enough for Smith — or maybe he couldn’t get that level of detail out of CSA‚ who can be notoriously dismal communicators.

To resort to the most irritating question in cricket – who’s winning?

“There’s no frontrunner at the moment‚” Moroe said.

“We set ourselves the timeline to fill the role before England comes here‚ so that the director of cricket can work closely with the team director and we can gauge the charisma between the two of them and see how they would role out their plans into the [2020] T20 World Cup.

“But should the need arise to go back‚ re-advertise and even start inviting internationals to apply‚ nothing is stopping us from doing such.

“The deadline we had set ourselves was this Friday. On Friday we’ll sit around the table and discuss‚ and if we’re happy with where we are we’ll announce our decision.”

Moroe said the chance of CSA coming up with a name on Friday was “50/50 at the moment”‚ but he didn’t seem convinced that would happen.

Nkwe was an interim appointment for the tour to India‚ and he could hardly be blamed for the 3-0 thrashing South Africa endured in the Test series — which was a hangover of their poor World Cup under Ottis Gibson.

But if England show that Nkwe’s team are still in a funk‚ his position will be under threat.

That part of this ongoing drama will start unfolding at Centurion on December 26.