Close clash shows what MSL could be 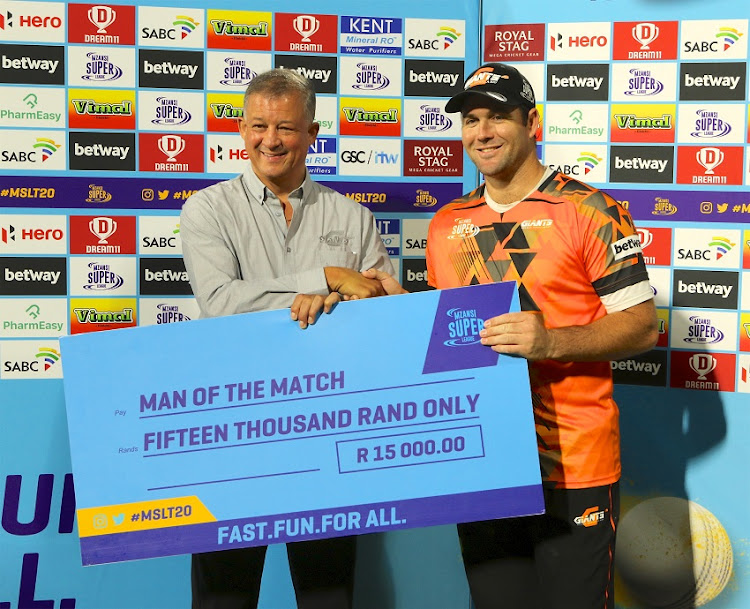 The Mzansi Super League (MSL) took the edge off its problems by delivering the closest game yet in this year’s competition at St George’s Park on Wednesday.

Plagued by inadequate sponsorship and broadcast revenue‚ ineffective marketing‚ little prospect of breaking even‚ and tiny crowds‚ the MSL doesn’t have much going for it.

But‚ for three or so hours while the Nelson Mandela Bay Giants and the Cape Town Blitz conjured a contest for the ages‚ none of that mattered as acutely.

The Blitz put up a decent 186/9 — the Warriors’ 189 against the Cobras in April is the only higher T20 first innings at this ground‚ and remains the record total — and the Giants reeled it in with five wickets standing and four balls to spare.

Janneman Malan and Quinton de Kock shared 72 for the first wicket for the second time in the tournament in scoring 31 and 39‚ and the rest of the visitors’ top five — Marques Ackerman‚ Liam Livingstone and Asif Ali — added another 87 to the total.

But the Giants fought back‚ taking 5/22 to limit the damage effectively.

The Giants seemed sunk without trace after only nine balls‚ what with openers Matthew Breetzke and Jason Roy gone with just three runs scored.

But captain Jon-Jon Smuts stood tall through partnerships of 53 with Ben Dunk‚ 46 with Heino Kuhn and 48 with Marco Marais before slashing a catch to backward point to go for a 51-ball 73.

Smuts’ gutsy effort included a reprieve for a no-ball dismissal by Wahab Riaz and surviving a lengthy review for a catch by George Linde at short fine leg off Sisanda Magala.

His exit‚ forced by a near no-ball from Wahab‚ left Marais — the cleanest‚ crispest‚ hardest hitter in South African cricket since Rassie van der Dussen — and Morris to get the job done‚ which they did by clattering 37 off 18 balls.

Morris clinched it in soap opera style with a mighty heave off Magala‚ which Linde‚ diving for all his worth on the midwicket fence‚ almost caught.

Instead the ball was deflected onto the boundary cushion‚ which cost the Blitz six runs‚ the match‚ and their position at the top of the standings — a spot now occupied by the Giants.

As a game of cricket it was the stuff of dreams: dramatic and intensely competitive with a fair sprinkling of quality individual performances.

As a window into what the tournament could be if major players in the sponsorship and broadcast world were able to have confidence that the MSL was a good place to spend their money‚ it was bittersweet.

Reality resumed‚ and with it an interview Hashim Amla gave to Pakistani website PakPassion.

“I find it very amusing whenever this whole subject of Kolpak and its effects on South African cricket are brought up‚” Amla was quoted as saying.

“Kolpak has been around for a long time‚ and so it’s surprising to me that it is been touted as the reason for all evils only because we lost the recent Test series to India [3-0 in October].

“I do not want this idea to become a convenient excuse for what basically were bad performances against India.

“When I was playing domestic cricket‚ we had quite a number of Kolpak players in our domestic teams also but then there was no talk of this subject.

“Let’s be honest about it‚ India are a really good side and they will probably beat all teams at home and the fact is that we did not play that well during the tour.

“Now one may argue that I am saying this because I have signed to play for Surrey next year as a Kolpak player but my story is slightly different as I have a few years of international cricket under my belt.

“The fact remains that this whole issue has gained importance just due to recent bad performances.”

Amla spoke from the United Arab Emirates‚ where he is playing for the Karnataka Tuskers in the Abu Dhabi T10 — a fact that on its own is indicative of some of South African cricket’s problems beyond Kolpak.

Having served as the Blitz’ batting consultant‚ free of charge‚ Amla has done his bit for the MSL.

But‚ if the game was in better shape at home‚ wouldn’t he prefer playing in the MSL to some gimmick far away?

You didn’t need to be at St George’s Park on Wednesday to answer that question.