Weak welcome for MSL at Newlands 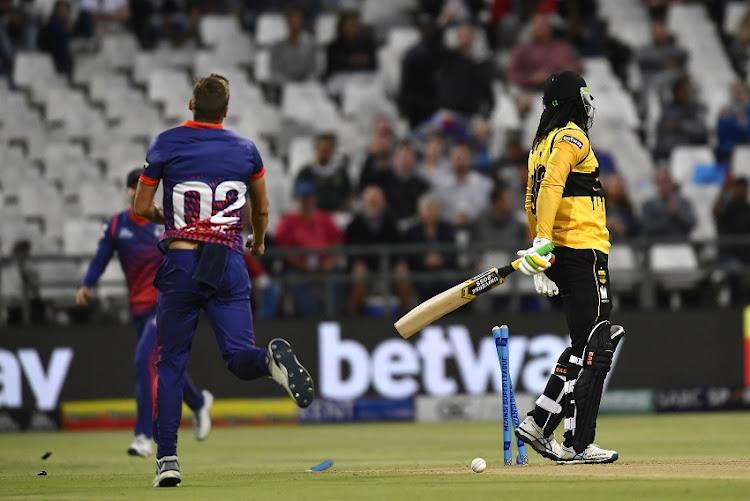 But for the road closures and the glowing floodlights‚ few would have known there was a game on at Newlands on Thursday.

Not much more than regular weekday afternoon foot traffic was visible outside the main gate‚ and an hour before the start it seemed more people were on the field than in the stands.

Around 2‚800 saw Kagiso Rabada bowl the first ball for the Jozi Stars to the Cape Town Blitz’s Janneman Malan in the latter side’s first home match of the second edition of the Mzansi Super League (MSL).

It didn’t help that a blustery but sunny day had given way to an evening greyed out by thick cloud tumbling down the slopes of Table Mountain‚ coddling the scene in a dampening mizzle.

Neither would prospective spectators have been coaxed off the couch by the fact that getting to the ground for the 5.30pm start would have meant‚ for many‚ taking on Cape Town’s traffic at its most snarled.

Most of the legions of younger fans T20 is designed for were‚ no doubt‚ if they knew what was good for them‚ pouring over their books preparing for upcoming exams.

Even so‚ considering 15 of the 22 players involved were internationals — among them major drawcards Quinton de Kock‚ Dale Steyn and Chris Gayle — where were the hoards who would‚ the theory goes‚ be drawn by the prospect of seeing the stars in action?

Or had they decided to take advantage of the unusual luxury of being able to watch the game on the free-to-air SABC‚ which is beamed into exponentially more homes than subscription service DStv’s SuperSport?

Unlikely‚ given that the state broadcaster has done precious little marketing for the tournament.

Six games into the competition‚ the same drab spectacle has played out more often than not.

Pre-match ticket sales have sometimes not reached 1‚000‚ and only 4‚480 saw the opening game between the Stars and the Blitz last Friday.

That seems reasonable‚ except that the match was played at the Wanderers — which was thus 86.88% empty.

The Durban Heat’s first two games — at Kingsmead and Centurion‚ both against the Tshwane Spartans — were washed out‚ the latter on the back of a 40-minute power failure.

The Heat’s next match‚ at home on Friday against the Paarl Rocks‚ is also in danger because of the tornados that have swept KwaZulu-Natal this week.

There is‚ of course‚ nothing organisers can do about the weather beyond crossing chronically rain-ruined Kingsmead off the fixture list forever.

But the dowdy atmosphere at most MSL matches‚ evident both at grounds and on television‚ is unmistakable.

The exception has been in Paarl‚ where the tournament seems to be promoted on almost every lamppost and billboard hoarding.

A crowd of 3‚000 turned out for the Rocks’ home game against the Blitz on Sunday — which doesn’t seem impressive‚ but represents almost half the small ground’s capacity.

That match started at 10am‚ which isn’t the best idea for Paarl’s sizeable cricket-minded but also churchgoing community on a Sunday.

Significantly more spectators are expected in Paarl this Sunday‚ when the first ball in the Rocks’ match against the Tshwane Spartans — or‚ you might say‚ against AB de Villiers and 10 comparative AN Others — will be bowled at 2pm.

The lesson‚ surely‚ is that if the money-bleeding‚ unloved‚ unlovable MSL must be played it would do better in smaller centres.

That’s looking from the outside in. From the inside‚ perspectives are different.

“It’s been absolutely brilliant‚” Stars coach Donovan Miller said after Thursday’s game‚ despite his team‚ the defending champions‚ having crashed to their third defeat in as many games.

The Jamaican has coached in the Caribbean Premier League and Canada’s Global T20 League‚ so he has the credentials to say: “It’s a very good league and probably right up there with some of the best T20 competitions in the world.”

England T20 player Liam Livingstone‚ a veteran of the Indian Premier League and the Pakistan Super League‚ concurred: “I’ve been around a few different competitions and the environment we’ve got at the moment is as good as I’ve seen.

“Logistically it’s been awesome‚ and the standard’s right up there.”

But he did hope that “we get a few more people coming out to watch us next time”.

Livingstone is unlikely to ask himself why Thursday’s attendance was poor.

He didn’t have to fight the traffic to get to Newlands at an inconvenient time‚ nor tear himself away from more important matters‚ nor put up with the SABC’s dismal commentary.

Better yet‚ he’s being paid R1-million for his trouble.

Livingstone says the MSL is a winner?

He would‚ wouldn’t he.