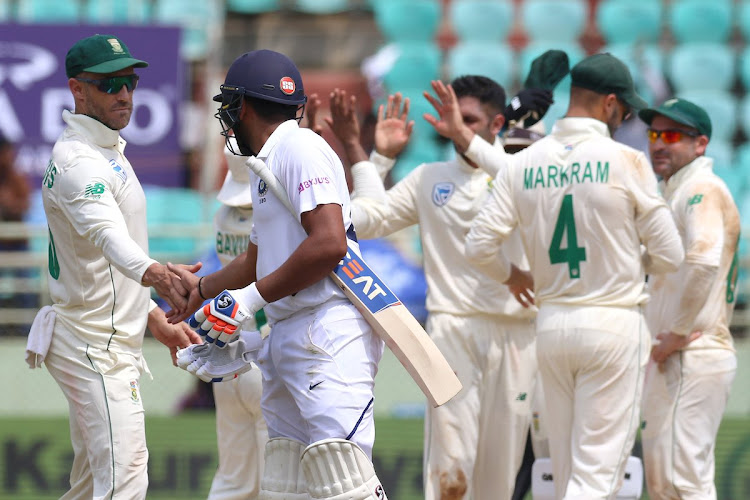 South Africa needed 492 deliveries to take India’s first wicket and 189 — not a lot more than a third as many — to claim the next four.

Then the Indians went exponentially better and ripped out three across 62 balls.

It was that kind of day in Visakhapatnam on Thursday: hours of lean and others of plenty.

But the flow of the first men’s Test remained unchanged.

At stumps on the second day South Africa were 39/3 in reply to India’s declaration at 502/7.

With a lead of 463 and Ravichandran Ashwin already on his high horse with 2/9 from eight overs‚ and Ravindra Jadeja not far from that threat level‚ India are firmly in control.

It was the 41st time a team had put 500 past South Africa‚ but only the third occasion it has happened in their 17 Tests in India and the first time anywhere since England racked up 629/6 at Newlands in January 2016.

Mayank Agarwal’s 215 is his career-best score and second only to Virender Sehwag’s 319 in Chennai in March 2008 as the highest innings for India against South Africa.

Rohit Sharma’s 176 was one run short of his best effort‚ which he made on debut against West Indies in Kolkata in November 2013 — 47 innings ago.

The 317 openers Agarwal and Sharma shared is the biggest stand for any wicket against South Africa in India‚ and no South Africa bowler has sent down more overs in an innings there than Keshav Maharaj’s 55.

For all that hard work he earned the wickets of Sharma‚ Ajinkya Rahane and Hanuma Vihari at the cost of 189 runs.

But the real price will be deducted from how much he has left in the tank for the second innings. If India need a second innings‚ that is.

By the look of the bokkies caught in Vizag’s floodlights as the sun sank with undignified haste in the 20 overs the South Africans faced‚ following on is a distinct possibility.

And especially now that the pitch is showing signs of rising from its deadness of the past two days.

“It’s probably one of the toughest surfaces I’ve bowled on in terms of it being a lot slower and not biting‚” Maharaj told reporters in Vizag.

“You got slow turn but the ball didn’t really kick off the wicket. When the ball got softer the odd one straightened or there was a little bit of bite‚ but the cracks have been opening because of the heat.

“So there is a little bit of assistance coming through now as opposed to when we started. I’d say about a day-and-a-half [before that started happening].”

If South Africa do make India bat again‚ Maharaj sounds up for the challenge.

“As long as the feel [of the ball] in my hand is good then I’m on the right track.

“Long spells is something I’ve always wanted. It’s the long hours that I train alone that has given me the match fitness to bowl them.”

Maharaj’s supporting spinners‚ Dane Piedt and debutant Senuran Muthusamy‚ might not feel the same way having taken a combined 2/170 from 34 overs.

Senuran won’t complain that‚ for his first wicket at the highest level‚ he produced a ball that turned appreciably‚ made no less than Virat Kohli look clumsy‚ found the leading edge‚ and nestled in the bowler’s happy hands.

Even so‚ it would have helped neither Senuran’s nor Piedt’s mood that Dean Elgar needed only four deliveries to remove Agarwal with a filthy full toss that produced an even more filthy sideways smear of a stroke — and a squeaky-clean catch of fine judgement by Piedt at deep midwicket.

Piedt returned as nightwatchman after Ashwin‚ eyes as bright as his bowling bristled with visceral dangers‚ zigged a delivery through Aiden Markram’s gate and zagged another that took Theunis de Bruyn’s bottom edge before being superbly taken by Wriddhiman Saha.

But Piedt lasted only four balls before Jadeja flattened his middle stump with a delivery that turned with ominous sharpness.

Expect Friday to be that kind of day. And Saturday and Sunday.