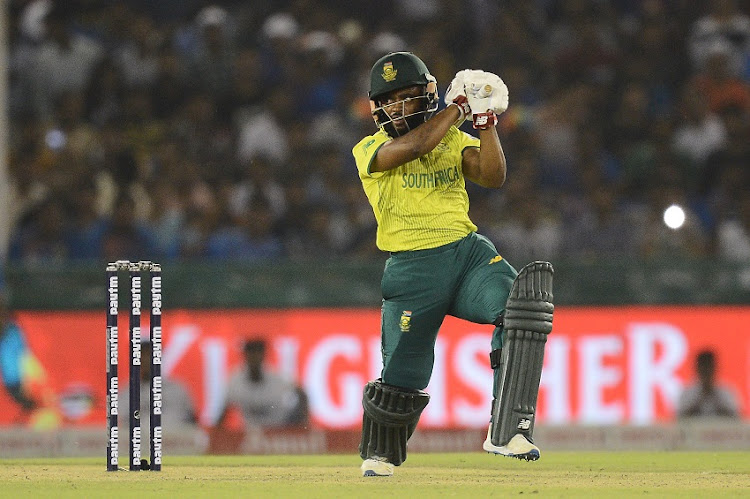 Temba Bavuma felt compelled to blame himself for SA's batting slowdown that led to the seven-wicket defeat against India in Mohali on Wednesday.

At the halfway mark‚ SA were 78/1 and should have accelerated at the Punjab Cricket Association IS Bindra Stadium where totals far bigger than SA's 149/5 have been hunted down with ease.

SA lost the toss and they were inserted by Virat Kohli‚ who then led India's chase with an unbeaten 72.

Bavuma‚ who made 49‚ started slowly‚ but during his partnership with Quinton de Kock‚ shifted into gear and batted well before the unexpected slowdown that ultimately sank the visitors.

“When David Miller came in at number five in the 13th over‚ I think we were in a strong position. That's where we probably fumbled a bit in our batting calls.

"At the halfway stage‚ I was thinking 180 could be a very competitive score‚ but we just weren't able to get going‚” Bavuma said.

“I'm also to blame as I wasn't able to get the momentum for the big hitters.

"The platform was set for the boys to go out and do their thing. It's something that we can work on and I don't think we were completely outplayed. There were a lot of positives we could take out.”

The fact that Bavuma has batted at six for the majority of his Test career is indicative of his selflessness. In that position‚ he often has to bail out the Test team from perilous junctures.

Bavuma indeed started slowly‚ but once he hooked Hardik Pandya for six‚ he unleashed the attacking game that was the cornerstone of the Highveld Lions' successful Cricket SA T20 Challenge campaign.

Even as a T20 debutant‚ it was always about the team for Bavuma.

“I don't see myself as a selfish person. I put the team ahead of all personal ambitions. I don't think I had to balance out between my own personal goals and the team. It's always about the team. If you look at how I got out‚ it showed that I put the team first‚” Bavuma said.

“For me‚ that's not a hard thing to balance‚ but for other players‚ that could be a challenge‚ especially when it's your debut. You know the opportunities can be limited and you want to make use of them as best as you can. Putting the team first will always serve you well.”

The T20I party shifts to Bengaluru on Sunday at the batting friendly M. Chinnaswamy Stadium. Tall totals are the order of the day there‚ but Bavuma isn't fazed by the prospect of facing India's crack top-order and their canny bowling outfit.

“They're a formidable team‚ but I don't think they're unbeatable. With our batting‚ it was just one phase where we let ourselves done and a quality side like India will make us pay. There will always be moments in the game where we can win‚” Bavuma said.

“It's about being aware of those moments and making sure we're in the right mental space to win those moments.”