Image: Muzi Ntombela/BackpagePix Kagiso Rabada's hardwork and work rate has been compared to that of West Indies great Michael Holding.

Kagiso Rabada is 54 days younger than Jofra Archer but he has bowled 6‚566 more deliveries in Test cricket.

That was before Thursday’s third Ashes Test at Headingley‚ where the Bajan-born England-raised fast bowler might well add to his reputation for putting the fear of the gods into all who face him.

But‚ as Michael Holding warned this week‚ Rabada’s string of back injuries should serve as a warning of the dangers of pace bowlers piling up too many overs.

Ten Test bowlers have sent down more overs than Rabada’s 1‚138.2 since he made his debut against India in Mohali in November 2015.

Seven of them are spinners and the others — Stuart Broad‚ Josh Hazlewood and James Anderson — are between four and 13 years older than him.

Holding was 21 when he played his first Test‚ against Australia at the Gabba in November and December 1975 — a year older than Rabada was when he cracked the nod.

But that took Holding almost seven years. Rabada has reached the same point in not quite four years.

And that’s only in Test cricket. Holding had bowled 10‚023 balls for West Indies’ Test and one-day teams by the time he had played 37 matches in the longest format.

The cumulative effect of all that was alarmingly apparent at this year’s World Cup‚ where Rabada was sixth in South Africa’s bowling averages with 11 wickets at 36.09.

He looked a flat‚ pale imitation of the superb athlete who tore through batting line-ups earlier in his career.

And let’s not get too excited about the Indian Premier League‚ where Rabada has bowled only 410 balls in two campaigns.

He got through more than half as many — 213 — for the Jozi Stars in last year’s Mzansi Super League alone.

But it is clear Rabada has mislaid the fire that once burned so brightly in his bowling‚ and which was crisply articulated by a former keeper of the flame‚ Mitchell Johnson‚ in his column in the Independent this week.

“Bowling with pace and hostility doesn’t happen without the intent to do so‚” Johnson wrote.

“You need the desire to do it in order to go through all the pain that comes with bowling at extreme speeds.

“I can say with absolute honesty that I used to run in wanting to take the batsman’s head off when I was trying to bowl a bouncer.

“That’s not me saying that I ever wanted to hurt anyone. It was simply a way to trick my mind and get up for the battle.” 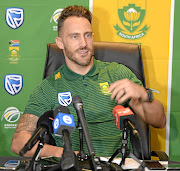 Johnson wrote in the wake of Archer putting Steve Smith out of the Headingley match with a blow to the neck during the second Test at Lord’s that concussed the Australia kingpin‚ who scored centuries in both innings of the series opener at Edgbaston.

The sight of Smith poleaxed on the pitch would have reminded many of Phil Hughes being killed in similar circumstances in Sydney in November 2014‚ but it took Johnson back to the Centurion Test of February the same year.

“The one incident similar to Archer’s ball to Smith that I can recall from my playing days is when I hit South Africa’s Ryan McLaren in a Test‚” Johnson wrote.

“I bowled the ball aiming for his head‚ but when it struck and I knew I’d hurt him I got no pleasure from it at all.

“I went to every length to make sure that Ryan knew that I was asking after him and hoped he was OK.”

McLaren rose and batted on in that second innings‚ but only for another five balls before being caught behind off Johnson — who also dismissed him in the first innings and finished with a career-best match haul of 12/157.

Rabada has taken 10 wickets in a Test four times. How many more such successes he will celebrate is difficult to know.

But he will know that‚ injury permitting‚ he has a long way to go before he’s done.

So far‚ Rabada has bowled 19‚140 deliveries in all cricket since his junior days.

Holding‚ who played his last competitive match for a Malcolm Marshall XI against an International XI at the Honourable Artillery Company Ground in Finsbury in July 2000 — seven years after his 37th Test — sent down 61‚396 balls in total. He was 46.

Hang in there‚ KG‚ you’re just more than half that age and even a third of the way towards matching Holding’s heap of hard work.