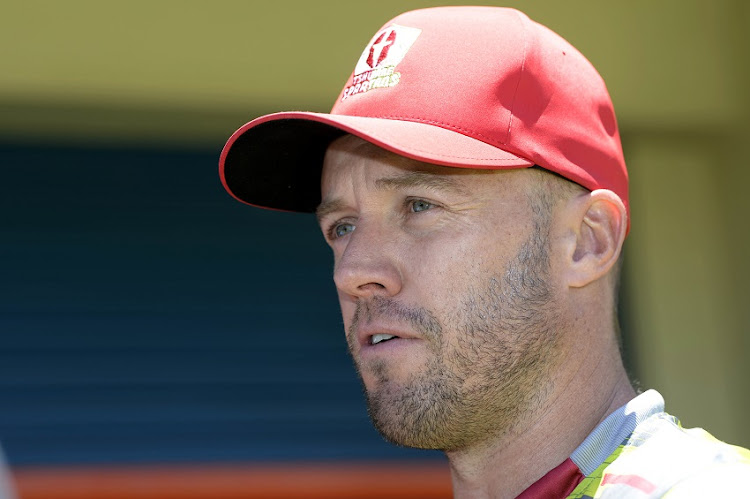 When AB de Villiers ended his international career on May 23 last year‚ the cricket world stopped.

It was dazed and confused.

Why would someone of his talent and stature would walk away from all they had ever known him to be?

But the blip passed and the cricket world restarted‚ and De Villiers continued to pop up in sideshows like the Indian Premier League.

And in reports that he coulda‚ woulda‚ shoulda played in the 2019 World Cup. If only he wasn’t‚ as a retiree‚ ineligible for selection.

But‚ for the most part‚ cricket moved on: the AB era was over. What’s next? Who’s next?

For De Villiers himself‚ matters were not as simple.

“It’s not an easy transition to go through‚” he said in London.

“All I know is that in the last 18 months‚ change was necessary — I need to spend more time at home.

“But it’s not easy to find a balance: where to now‚ and what to do. The last 12 months I think I’ve played four months‚ so it’s not a lot of cricket.

“I’m really enjoying being at home and being a father and a husband‚ and seeing my brothers and parents on a regular basis.

“But I’ve still got to stay in decent form to be good enough to play in these [T20 franchise] teams.

In the short term‚ play for Middlesex in the county T20 competition — which starts on Thursday with a match against Essex at Lord’s.

If Middlesex go all the way to the final‚ that will take De Villiers to September 21. Then what?

One of these years he won’t ask himself that question. Or will he? What will he do once he hangs up his bat and pads for good?

“I’m working on it‚” he said‚ explaining that he has been “getting to know more about property development” in three courses offered by the University of Cape Town in partnership with the South African Cricketers’ Association.

“I’m not sure if that’s the route. My father-in-law is in business and I might get involved with something to do with property. But I don’t know if it’s my passion.

“I’m going to have to find something different‚ away from the game. I would like to stay involved with the game‚ but I wouldn’t want it to be the only thing and still travelling‚ because then I might as well still be playing [internationally].

“I definitely have a passion for helping out‚ especially some of the young‚ talented guys in the country to help get them up to international level.”

Ah‚ yes. International level. The World Cup and all that …

“I felt for the guys. Everything that could have gone wrong did go wrong.

“These tournaments‚ very often‚ are determined by the way you start. I felt like we weren’t on the button the first few games.”

South Africa’s challenge to win the title for the first time was all but snuffed out in the first seven days of the tournament‚ when they were left reeling from defeats by England‚ Bangladesh and India.

“The loss against Bangladesh was a big turning point‚” De Villiers said. “It’s difficult to come back from that.

“But it was a fantastic end to the tournament — beating the Aussies [by 10 runs at Old Trafford] was a nice way to finish‚ and it shows there are lot of guys with big character in the team and that the team spirit is still there.”

Not that that made much difference to a bottom line that read played eight completed games‚ won only three.

“I’m gutted for the boys. They’re my friends and we still all get along really well.

“It was difficult to watch the guys go down like that.”

Welcome to our world.