Now what? Where does cricket go now that it’s greatest match has been played? 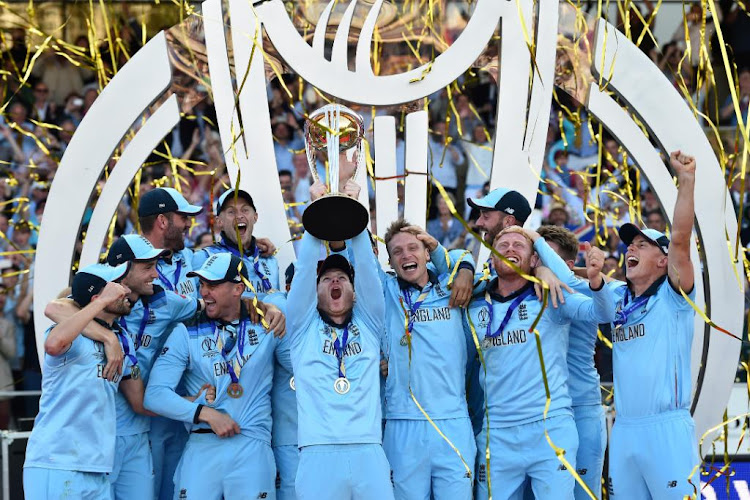 It was the ricochet that did it‚ that tipped Sunday’s men’s Cricket World Cup final over the edge of reason and into Tarantino territory.

Three balls left in the game. Nine to get. Two wickets in hand. Trent Boult hares towards Ben Stokes.

A full toss starts on the line of the left-hander’s off stump and veers towards middle.

Stokes smears it‚ meatily‚ like a punch to the gut‚ towards midwicket.

Martin Guptill is on the case — charges in‚ gathers the ball with surgical slickness‚ uncoils into a throw aimed at the stumps Stokes is hoofing towards to complete a second run.

Stokes knows it’s going to be close. He dives. The ball is whistling towards a direct hit. If it somehow doesn’t find its target‚ Tom Latham is poised over the wicket‚ primed to do the needful.

But the ball never arrived. Instead it collides with Stokes’ outstretched bat as he crashes to earth. And away it scoots at an angle of about 160 degrees compared to where Guptill unlocked and unloaded.

Colin de Grandhomme is after the ball‚ but he is running like a man under water chasing a stone skipping on the surface.

It takes the ball six seconds from the point of its contact with Stokes’ bat to the moment it bumps‚ apologetically‚ into the boundary cushion at third.

It feels like six hours. De Grandhomme arrives a moment later‚ spent with effort and sick with the realisation of what this means.

Stokes has lost his bat along with‚ apparently‚ his senses. He’s on his knees‚ his hands held up in what looks like surrender‚ eyes wide‚ wild and white with bewilderment. Don’t shoot.

Umpires Kumar Dharmasena and Marais Erasmus confer‚ and Dharmasena turns his back on the pitch to signal to the scorers.

He holds up all five fingers of his right hand and the thumb of his left: six runs added. Three needed off two balls. Nevermind the rest.

The ambiguity in what cricket calls its laws about whether the run being completed should count if overthrows result‚ the two run-outs off the last two balls — both without the batters having faced a ball‚ a first in a World Cup innings — to tie the scores‚ the super overs that failed to untie the scores‚ the boundary count that finally made England the champions — and was surely the revenge of some sport-hating ultra-nerd of a bean counter who sits stooped‚ open-mouthed‚ sticky-eyed‚ unshowered for days‚ over a screen‚ captured by the numbers flitting this way and that‚ who wouldn’t know humanity if it opened a vein and bled all over him.

None of that is as weird as the ricochet.

It’s the kind of miracle performed by accident in a bar at 4am by the most hopeless pool player‚ who is drunk enough to forget how hopeless he is.

Except that Stokes‚ like everybody else involved‚ is stone cold sober.

Perched high above all that‚ the 237 accredited journalists don’t know whether the pressbox is imploding or exploding.

But they do know‚ when the fireworks finally rent the evening sky‚ that none of them has seen anything like this‚ much less reported on it.

How do you write the final scoreline? England won by what? New Zealand lost by what?

Hours later one of the reporters‚ a man who knows what it feels like to play in a World Cup final‚ rises from a laptop still steaming with the last of the thousands of words he has written this sacred and profane day.

He offers a few more words‚ gently‚ quietly‚ with something like apprehension in his tired eyes‚ into the still sparking air.

He is trying to reconcile the game he used to play and thought he would know forever with what he has seen‚ and he is failing. There is poignance here that must be protected and cherished. The gods bless and keep this man.

Remember when the 1999 World Cup final at Edgbaston was the greatest one-day international yet played (yes‚ my beloved wounded fellow South Africans‚ it really was)?

Remember when the 438 game took that title on a crash-boom-bang crazy day at the Wanderers seven years later?

Forget that. All of it. And all the other contenders. ODI cricket as we thought we knew it no longer exists.

All that does exist is a question too terrifying to answer‚ but which was asked by every beat of every racing heart in Sunday’s golden afterglow.

Where does this damn fool game go now that it’s greatest match has been played?