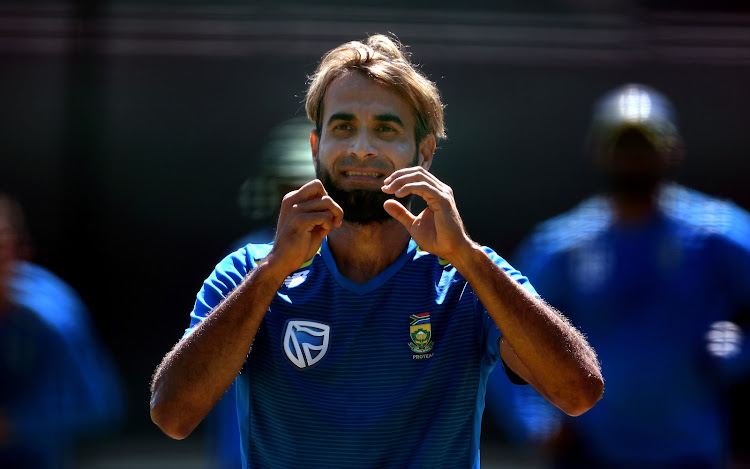 Imran Tahir nailed it in one in Manchester on Thursday when he said: “The sun’s come out now but the World Cup is gone.”

It was indeed warm — a smoking 22 degrees — in England’s friendliest city.

And the men’s World Cup is indeed over as a project for South Africa.

No amount of marketing fluff can change the fact that their game against Australia at Old Trafford on Saturday‚ their last match of the tournament‚ is a bona fide dead rubber.

The Aussies were the first team to reach the semi-finals.

Faf du Plessis’ side were the first to shamble out of the running for the semis.

That’s about as dead as dead can be.

Zombies are more alive than this non-contest.

But it will mark the last of his one-day internationals.

At 40 — which makes him the oldest player in the tournament — and with 172 wickets and a sparkling economy rate of 4.63 from his 106 matches spread over more than eight years‚ the leg spinner has had enough.

“After a few days’ rest I feel like I could play again‚” he said. “I’ve been trying to busy myself with family‚ but it does get me when I think about it.

“It’s quite hard to think about where I am‚ but that’s how life works.

“It’s hard to be finished with cricket because I always wanted to play.

“I could easily have played for another year for South Africa.

“My fitness is fine. From a performance point of view‚ I think I’m doing well.

“But it’s time for someone who can step up and take the responsibility — those youngsters in the queue.”

Even so‚ the future won’t be easy for Tahir.

“It’s something in your soul. You’re going to miss out.

“I know I’m still going to carry on playing; I’m going to be busy after nine days playing for Surrey and in the Euro League‚ and all of the leagues.

“But it’s definitely going to affect me if I see the boys playing in green and gold and I’m not there. It’s going to be tough for me.”

Tahir isn’t quite done at international level. His aim is to keep going until the end of the T20 World Cup in Australia in October and November next year.

Whatever happens‚ he will always have a special place in cricketminded South Africans’ hearts.

“I feel that and I think that’s what has kept me going‚ especially for the last three years‚” he said.

“I feel the love‚ and that people respect me. I was amazed one day in [Durban’s] Gateway Mall — I’ve seen the rainbow nation.

“We beat Australia 5-0 [in an ODI series in September and October 2016]‚ and I saw black people‚ white people‚ coloured people‚ Indian people‚ muslim people‚ they all just came from nowhere.

“It was very emotional for me. Everyone came and said‚ ‘We’re proud of you’.

“We don’t realise what we do for people but to see the love coming back was the best moment of my life.

“I have a lot of respect for South African people. That’s the only thing that has kept me going. I’m really grateful to everybody.”

The feeling‚ Mr Tahir‚ is mutual.