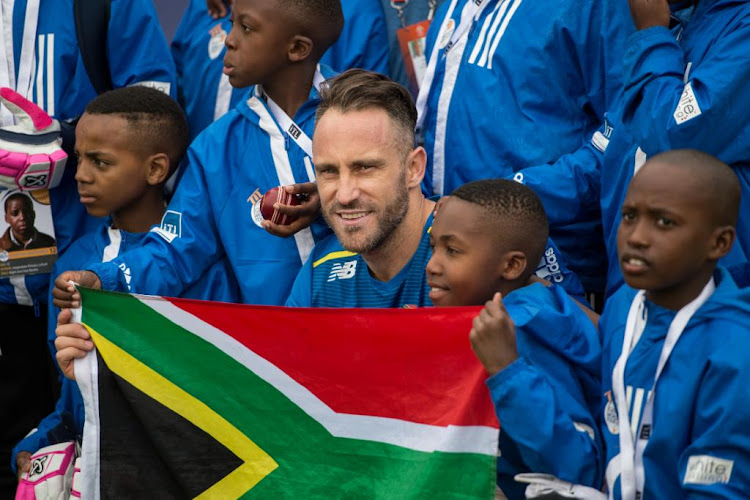 That done‚ he popped his chewing gum — which‚ happily‚ he had remembered to remove before the start of his press conference and reserved‚ presumably between his fingertips‚ for re-use — back into his mouth with something close to a flourish.

Then‚ his eyes noticeably brighter than when he was behind the microphones‚ he rose and took his leave.

It was time for the real reason he was at the ground: South Africa’s last training session before their crunch World Cup game against New Zealand.

De Kock left behind him a roomful of reporters wondering how they were to turn what he had said into something publishable.

Rather‚ they weren’t at all sure how to negotiate what he hadn’t said and still satisfy their editors. And‚ of course‚ you‚ gentle reader.

Good on him. De Kock’s job at the World Cup is to open the batting and keep wicket‚ neither of which involves talking to the press.

Besides‚ no-one who knows the difference between a stump and a sausage roll needs De Kock or anyone else to tell them that South Africa are under pressure to win today.

Another loss and their campaign will curdle into what might have been.

They won’t be out of the running for a place in the semi-final‚ but they also won’t be in the running in any real sense.

They will be in limbo; at the mercy of what who might do to whom in matches beyond their control.

New Zealand have had the easiest ride of any of the contenders at this tournament‚ knocking off Sri Lanka‚ Bangladesh and Afghanistan‚ and escaping with a point from a washout against powerhouses India.

South Africa had the most difficult start‚ taking on England and India in a week that also featured a game against Bangladesh. One win from those matches would have been a fair reflection of their capabilities.

That proved beyond them‚ and now they are just another bad day away from having to pretend they are still taking things seriously.

“Obviously‚ it’s a big game for us‚” De Kock said.

“But‚ in saying that‚ our next three or four games that we have … they’re all going to be big games‚ anyway‚ for us for the rest of the tournament.

“We’re just going to have to go out there‚ keep our heads steady‚ and play freely.”

Would that it were that simple. Victory on Wednesday will have to be followed by successes against Pakistan‚ Sri Lanka and‚ deep breath‚ Australia.

But let’s not get beyond ourselves. Today is what matters‚ and the history is messy.

South Africa have won 379 of the 592 completed one-day internationals the teams have contested‚ or almost two-thirds. Thing is‚ five of their losses against the Kiwis have come in the seven World Cup games they have played against each other.

And two of those defeats have been more momentous than most: the 2011 quarter-final and the 2015 semi-final.

“I remember hoping like heck that I don’t have to bat‚” Trent Boult said of that crazy night at Eden Park four years ago.

So he got his wish‚ not least because Grant Elliott completed his unbeaten 84 by smashing Dale Steyn over his head for six to win the match with four wickets standing and a ball to spare.

The teams who will take the field on Wednesday will be different‚ and the way they play cricket has also changed.

New Zealand’s top four of Martin Guptill‚ Colin Munro‚ Kane Williamson and Ross Taylor have made 451 of the 531 runs all their batters have scored. That’s 84.93%.

That South Africa have scored 853 runs — 322 more than New Zealand — and have only three log points compared to the Black Caps’ seven tells its own story about the strength of their respective opponents.

But‚ in Lockie Ferguson‚ Matt Henry and Jimmy Neesham‚ they will be up against a quarter of the leading dozen bowlers in the World Cup‚ going into Tuesday’s game between England and Afghanistan.

How much will Lungi Ngidi‚ who missed the matches against India‚ West Indies and Afghanistan with a hamstring strain and is back in harness today‚ offset the impact of New Zealand’s quality quicks?

No-one involved today will be spinning the facts and figures anything like as outrageously as all that.

But‚ unlike the rest of us‚ they don’t have to watch and wonder what will happen. They just have to make it happen.

They’re the lucky ones.