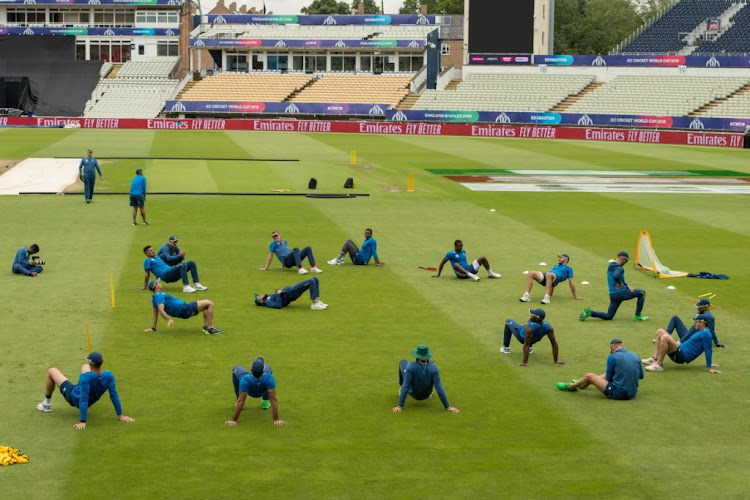 The Proteas go about their business during a training session ahead of their match against New Zealand at Edgbaston.
Image: Cricket World Cup/Twitter

Of the 59 one-day internationals played at Edgbaston only seven have not reached a result‚ one of them abandoned entirely.

But all of those false starts have been among the most recent 29 games at the ground.

Thunderstorms have been forecast at 10am‚ noon and 3pm‚ and the chance of rain floats between 43% and 51%.

Rain has soaked Birmingham in recent days‚ and was falling over the ground late on Tuesday afternoon and into the evening.

South Africa and New Zealand have both fallen foul of the weather gods at the World Cup‚ against West Indies and India respectively.

So neither will be keen to sit around waiting for the skies to clear on Wednesday.

The Kiwis will be less anxious‚ what with three wins already in the bank.

But Faf du Plessis’ team could feel the urge to help the groundstaff with their mopping up duties — they have won only one of the their five games and desperately need the two points to stay alive in the race for a place in the semi-finals.

The match is the first scheduled for Edgbaston in this year’s World Cup‚ which has only added to speculation about the pitch.

It looked significantly less green — more like a delicate shade of Marie biscuit‚ in fact — than the surface South Africa beat Afghanistan on at Sophia Gardens in Cardiff on Saturday.

And with both the South Africans and the New Zealanders heavily reliant on pace‚ that could force a rethink about personnel and tactics.

But there is little doubt that Lungi Ngidi‚ the towering fast bowler who has missed South Africa’s last three games with a hamstring injury‚ will be unleashed.

New Zealand have retained the same XI for all four of their matches‚ and seem set to do so again on Wednesday.