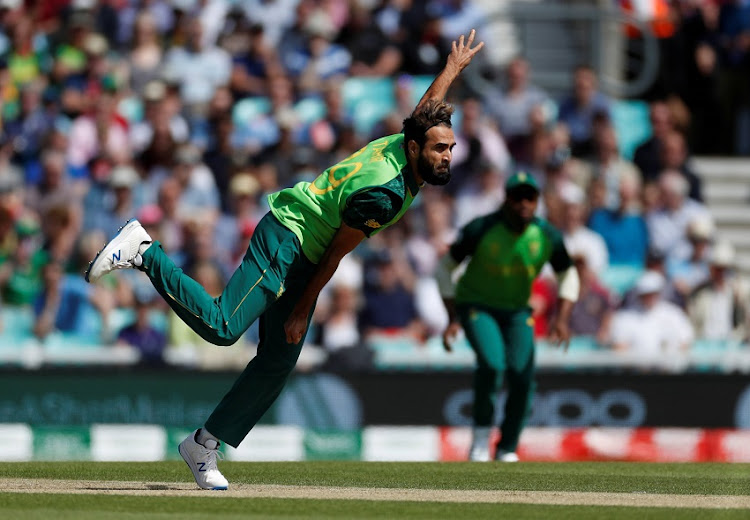 Imran Tahir will look to mark his 100th one-day international with a match-winning performance in South Africa’s World Cup game against Bangladesh at the Oval on Sunday.

The clash will be played on the same pitch on which England beat South Africa by 104 runs in the tournament opener on Thursday.

The used surface is likely to be slower‚ which should add to the threat posed by leg spinner Tahir and perhaps make Faf du Plessis think about adding left-arm wrist spinner Tabraiz Shamsi to the attack at the expense of a fast bowler.

That approach would get Tahir’s vote.

“As a spinner‚ I like to see two spinners playing in the game‚” he said on Saturday.

But it’s South Africa’s batting that will occupy Du Plessis’ mind most.

Having restricted England’s powerful line-up to 311/8‚ South Africa crumbled to 207 all out in 39.5 overs in which only Quinton de Kock‚ Rassie van der Dussen and Andile Phehlukwayo forged past 15.

The readiness for Sunday’s game of Hashim Amla‚ who was hit on the grille of his helmet by Jofra Archer on Thursday and retired hurt to undergo concussion tests — which came back clear — will be uppermost for the South Africans.

Amla returned to continue his innings‚ but if he is deemed unfit Aiden Markram would probably be moved up one place in the order with David Miller‚ who was left out against England‚ slotting in lower down.

Tahir‚ South Africa’s highest-ranked bowler at the tournament‚ in fourth place overall‚ showed his value by taking the new ball on Thursday — and having Jonny Bairstow caught behind with his second delivery.

The move surprised many‚ including wicketkeeper De Kock‚ who said on Thursday the first he heard about it was shortly before the start of the match when he was told he would need his helmet.

But it didn’t rattle Tahir‚ who said on Saturday: “It was a plan I had been working on for the last year or so‚ bowling internationally with a new ball.

“I think we knew that it was going to be pretty much a shock for everybody.

“I was really pleased the way I came out and got a wicket for the team. The plan worked.”

Tahir said he would be happy to play the role again.

“If my captain asks me again‚ I won’t say no. I like challenges.”

Pakistani-born Tahir made his debut for South Africa in February 2011 and has played 20 Tests along with his 99 ODIs and 38 T20s.

Among South Africa’s bowlers at the World Cup only Dale Steyn has taken more wickets in the format: 196‚ or 32 more than Tahir’s 164.

But Steyn has bowled 1‚111 more deliveries than Tahir‚ who is eighth on the list of all-time wicket-takers among all frontline bowlers at the tournament.

“This means a lot to me‚ which I can never express in words‚” Tahir said of his imminent century.

“I’m the guy who has come through a lot of hard patches‚ who has seen a lot of hardships and lost my parents without them seeing me play international cricket.

“So this is really special to me‚ for my family. I have not seen my brothers or sisters in the last two years‚ so this country that I’m representing and every game I’m playing for is really important to me‚ and I’m really proud.

“I never thought I’m going to play with the legends‚ and the youngsters‚ who I believe are going to be legends for this South African team.

“I’m really grateful for all I’ve got from South Africa and I hope that I’ll pay that back somehow.

“I will be very proud if I do well for my team.”

Tahir‚ at 40 the oldest player at the World Cup‚ is set to retire after the tournament.