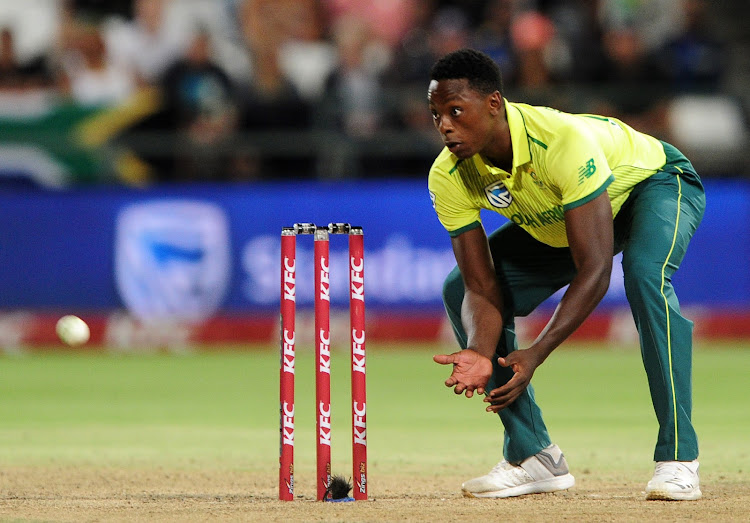 Kagiso Rabada is being treated with caution to get him fully fit before the start of the Cricket World Cup in England.
Image: Ryan Wilkisky/BackpagePix

While Anrich Nortje has again been struck down by an unfortunate and untimely injury‚ all eyes have shifted to the immediate and pressing concern that is Kagiso Rabada’s fitness.

Rabada‚ who has been outstanding for the rejuvenated and renamed Delhi Capitals in the Indian Premier League‚ has had to miss the knockout stages with a back problem.

Proteas team doctor Mohammed Moosajee said Rabada’s back injury‚ a lumber muscle strain with associated muscle spasms‚ didn’t require surgery but also has him in a race against time to be fit for the opening game against England at the Oval on May 30.

“With KG‚ we are extra cautious because of two reasons‚” Moosajee said.

“He had a back issue that kept him out of the game for a protracted amount of time.

"Secondly‚ there’s his importance in the squad‚ so we’re managing his rehab and his return to play very carefully.

“We are confident but we want to give him as much time to recover as possible.

"The anticipated recovery period for KG’s injury is two to three weeks and we are hopeful he’ll make a full recovery to be part of the World Cup squad.

“The selectors have ensured they have enough options on the table but there are some players that have been earmarked as standby players.”

There’s also the significant matter of Dale Steyn and his shoulder injury also flaring up while on duty with the struggling Royal Challengers Bangalore.

Steyn hasn’t been a stranger to the physiotherapists table in the past few years with an assortment of ailments.

However his shoulder has been more than troublesome as it’s kept him out of the game for a long time.

Steyn’s fitness has never been in doubt but the one-time Proteas fast-bowling stalwart took to an International Cricket Council tournament with an injury cloud back in the 2013 Champions Trophy.

He ended up playing only one game and missed the semifinal against England.

Proteas team physiotherapist Craig Govender said they were treating Steyn’s shoulder with the needed caution‚ especially with his advanced age of 35.

“As you could see in the previous series‚ Steyn could throw and bowl.

"We do manage workloads prior to matches but he doesn’t throw as excessively in practices due to the management in place‚” Govender said.

On the bright side for the national team‚ JP Duminy‚ Lungi Ngidi and Tabraiz Shamsi are back to full fitness.