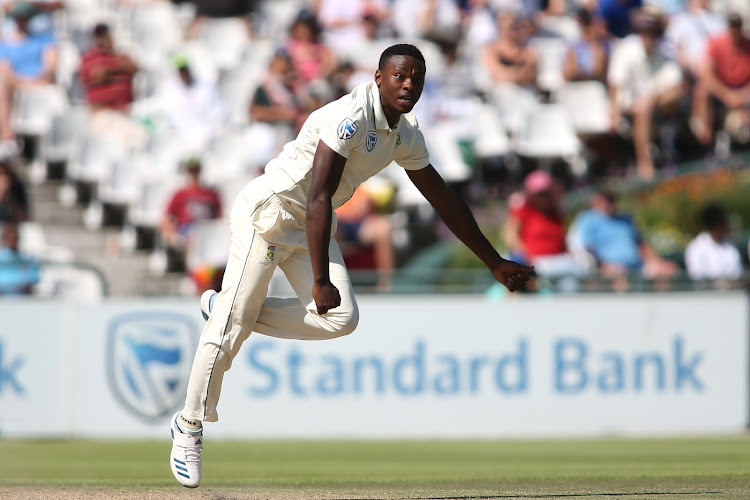 Is it overstating the case to immediately cancel all South African fast bowlers’ leave until further notice?

Probably‚ but South Africa are getting there — as is their World Cup opener against England at the Oval on May 30.

Friday’s confirmation that Kagiso Rabada is on his way home from the Indian Premier League (IPL) with a back problem comes on top of Dale Steyn having found another way to hurt his bowling shoulder.

Lungi Ngidi is still making his return from a side strain‚ and Anrich Nortjé is recovering from his own shoulder issue.

None have been ruled out of the global showpiece‚ but‚ at this rate‚ Andile Phehlukwayo and Dwaine Pretorius might have to share the new ball in London in less than a month’s time.

A Cricket South Africa (CSA) release on Friday said the decision to reel in Rabada “for further medical assessment and treatment” had been made in the context of his previous back injuries‚ including a stress fracture last year.

“Kagiso experienced stiffness in his lower back a few days ago and was taken for scans for further investigation‚” the release quoted South Africa team manager and doctor Mohammed Moosajee as saying.

“The scan results‚ combined with further assessment by our physiotherapist Craig Govender‚ who is fortunately in Delhi [with Rabada’s IPL franchise‚ the Capitals]‚ led the CSA medical committee to the decision to withdraw him from the remainder of the IPL.

“Kagiso has a history with back injuries and the CSA medical team is taking the best measures to ensure he is fully fit for the World Cup.

“He will consult with a back specialist upon his return and proceed with a treatment and rehab programme.”

There is‚ then‚ a fullblown emergency in the World Cup squad so meticulously considered and compiled in the past two years.

Zondi said standby players had been identified but also that their names remained embargoed.

“The depth that we have are the guys we have given opportunities to in terms of ‘Vision 2019’‚” Zondi said.

Since he coined that term in January 2018‚ South Africa have capped 10 players in one-day internationals — half of them seamers.

Thing is‚ they include Ngidi and Nortjé‚ and Duanne Olivier‚ who is now a Kolpak player.

That leaves Junior Dala‚ whose 11 scalps in franchise T20 cricket this season makes him the joint second-highest wicket-taker in the competition‚ and Beuran Hendricks‚ who claimed four in as many matches before he became an injury replacement in the IPL — where he has yet to play a game.

It’s been almost six years since he played his last ODI‚ he’s 36 and he is clearly not among the modern game’s sleek athletes.

So a World Cup fairytale for Rory Kleinveldt seems unlikely.

How about Vernon Philander‚ who took 10 wickets in nine games while conceding 7.38 runs an over for the Cobras and scored 149 runs?

More believable would be a call-up for Chris Morris‚ who’s taken 13 wickets in nine games — but at an economy rate of 9.27 — in the IPL.

Until this week‚ Morris shared the Delhi Capitals’ dressingroom with Rabada — who leads the competition with 25 strikes in a dozen games.

That’s the difference between the players South Africa were able to pick in the first place‚ and those they might need to keep the pin in the hand grenade.