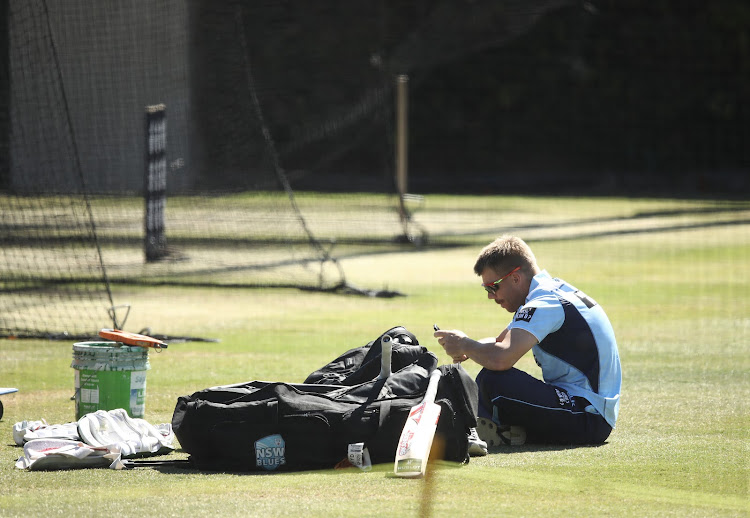 David Warner waits in the nets before the International Twenty20 match between Australia and India at Sydney Cricket Ground on November 25, 2018 in Sydney, Australia.
Image: Ryan Pierse/Getty Images

Not many people are unhappy when David Warner leaves‚ but the Indian Premier League (IPL) is sad to see him go.

Warner bailed on the tournament on Monday having scored 692 runs — 172 more than anyone else.

He signed off with a 56-ball 81‚ his eighth half-century in a dozen innings that also featured a century‚ for Sunrisers against Kings XI Punjab in Hyderabad.

Next stop for Warner is Australia’s World Cup camp at the National Cricket Centre near Brisbane.

The facility is on Greg Chappell Street‚ which used to be called Bogan Street.

Readers with a working knowledge of Warner’s history — a serial opponent-abuser banned by Cricket Australia (CA) for ball-tampering — and Australian slang — “bogan” is used to describe someone uncouth — might get a laugh out of that.

“It’s great to get out there and do your job properly‚” Warner‚ almost always a bouncy interviewee‚ said during the on-field presentation after the match.

His thoughts were turned to the World Cup in England from May to July‚ when Australia will try to add a sixth title to the five they have won in the 11 tournaments yet played.

“We’re the reigning champions so for us it’s about going out there and backing our ability‚” Warner said.

“I’m looking forward to that and [the IPL] is a great stepping stone.”

Before he went to India‚ Warner spent his time out of an Australia shirt playing for the Winnipeg Hawks‚ the St Lucia Stars and the Sylhet Sixers in the Global T20 Canada‚ the Caribbean Premier League and the Bangladesh Premier League.

But the IPL is easily the best preparation he has had for returning to the world stage‚ not least because the tournament has the money to attract the best talent.

Conditions will be starkly different in England‚ what with faster‚ more lively pitches and bigger‚ lusher outfields — but Warner wasn’t expecting to have to work especially hard for his runs.

“This World Cup you’ll see some high scores. For a batter‚ hopefully the ball isn’t swinging too much.”

From his lips to the ears of England’s groundstaff‚ Faf du Plessis‚ Quinton de Kock and David Miller would say.

All three are key members of South Africa’s World Cup squad‚ and all three are playing in the IPL.

De Kock is ninth in the runscoring charts with 393 from 12 innings for Mumbai Indians.

The others have had a quieter time. Du Plessis’s seven innings out of a possible 12 have brought him 179 runs with one half-century. Miller also has a 50 in 10 knocks‚ from which he has 213 runs.

But there’s brighter news for South Africans on the other side of the equation‚ where Kagiso Rabada is the IPL’s leading wicket-taker with 25 scalps.

Rabada has two hauls of four wickets‚ and has been one of the leading stars of a competition that historically has not been receptive to South Africa’s black players.

The fact that he has played all 12 of Delhi Capitals’ games will worry those who fear that bowlers‚ in particular‚ are easily burnt out by the tournament’s relentless playing and travelling schedule.

But Rabada has bowled only 47 overs in those 12 games — not too taxing for almost six weeks of work.

The IPL’s second-highest wicket-taker is Imran Tahir‚ who has claimed 17 with one four-for in 12 games for Chennai Super Kings.

Dale Steyn arrived as a replacement for Nathan Coulter-Nile in Royal Challengers Bangalore’s dugout‚ and played only two games before he was taken out by a shoulder injury that has put him in a race against time to be fit for the World Cup.

But Steyn made his time count by snapping up four wickets in the eight overs he bowled.

If he doesn’t make it back from rehab to take his place in England‚ South Africa could do worse than turn to Chris Morris.

He did not crack the World Cup nod‚ but in his eight games for Delhi he has taken a dozen wickets.

See‚ the IPL is good for something.