No back-up keeper‚ no problem for SA‚ Australia‚ Pakistan‚ Afghanistan 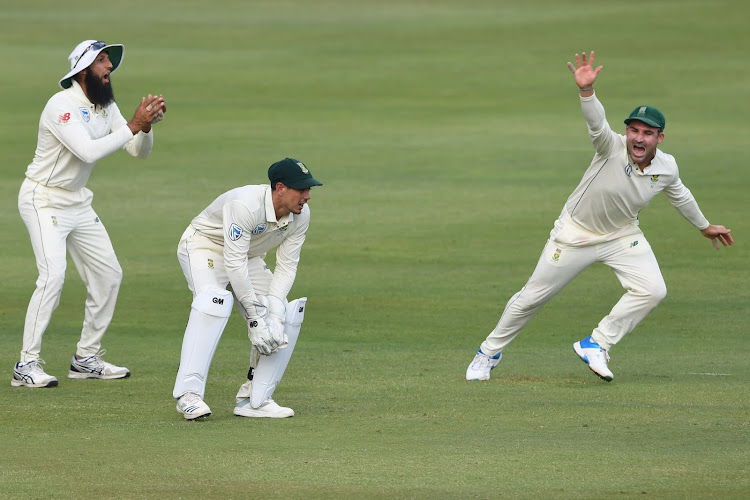 You might not think South Africa have much in common with Australia in World Cup terms‚ but they do this time.

Famously‚ the Aussies have won five of the 11 tournaments yet held. Infamously‚ South Africa have yet to break their duck — despite turning up with one of the strongest squads more often than not.

But both of them will turn up in England next month without a back-up wicketkeeper.

Quinton de Kock is the only specialist stumper in South Africa’s squad‚ as is Alex Carey in Australia’s.

And that’s worrying Ian Healy‚ who told Fox Sports: “I still worry about a warm-up incident‚ if Carey goes down in warm-ups or in the first 10 overs …”

Healy hoped Peter Handscomb‚ who has been behind the stumps in 94 of his 375 games going back to his under-17 days‚ would be in the squad and be able to serve as Carey’s understudy.

But‚ despite scoring a century and three half-centuries in his 12 one-day internationals this year‚ Handscomb lost out on a place in the squad to Steve Smith‚ who has returned from his ball-tampering ban.

“I thought that back-up role was going to be good for [Handscomb] at the World Cup‚” Healy‚ Australia’s keeper in 119 Tests and 168 one-day internationals in the 1980s and 90s‚ said.

“He’s very capable of doing it in the one-day game as we’ve seen for Victoria. I had him in my World Cup squad as a batsman and someone who could do the ’keeping job if there was a warm-up accident or something like that.

Hashim Amla gets the nod in SA's World Cup-bound squad

The Hashim Amla versus Reeza Hendricks shootout reached its climax on Thursday after the former‚ a veteran in his own right‚ was preferred for South ...
Sport
3 years ago

“I would have had a bit of wicketkeeping back-up in the 15.”

Australia’s answer to all that is that their A side will tour England during the World Cup.

That squad includes Handscomb as well as Matthew Wade and Tim Paine; wicketkeepers all.

South Africa are both ahead and behind the Australians in their back-up wicketkeeping policy.

They don’t have a mini-squad of keepers down the road on an A tour. But they have‚ at Faf du Plessis’ suggestion‚ put their faith in David Miller to step into the breach should anything untoward happen to De Kock.

Miller‚ a supremely athletic and skilled fielder‚ has started innings in the big gloves and small pads in eight games at senior level. But that’s eight games out of his total of 615: 1.3%.

So it’s good thing Miller took over from De Kock for the last eight balls of the Sri Lanka’s innings in the second one-day international in Centurion last month — and showed some chops by smartly whipping off the bails when Imran Tahir’s leg break beat Vishwa Fernando‚ who had his foot safely behind the crease.

Miller was the designated wicketkeeper in the first T20 against the Lankans at Newlands two weeks later‚ and made it count with a catch and stumping. And‚ significantly‚ not conceding any byes.

Of the nine 2019 World Cup squads that have been named‚ South Africa‚ Australia‚ Pakistan and Afghanistan will go to England without another keeping option.

You wouldn’t think there’s much to connect Murugan Ashwin‚ a leg-spinner who has three first-class caps‚ to David Warner‚ who has 102.
Sport
3 years ago

Even the hosts — who shouldn’t struggle‚ in a pinch‚ to rustle up a wicketkeeper from any yonder county — have covered this base by picking Jos Buttler and Jonny Bairstow. Then again‚ they tend to overthink things.

Bangladesh have gone one better by including Liton Das‚ Mushfiqur Rahim and Mohammad Mithun.

India will bring MS Dhoni and Dinesh Karthik‚ New Zealand the Toms — Latham and Blundell — and Sri Lanka the Kusals — Mendis and Perera.

Some of those players’ roles have evolved away from keeping and towards batting‚ but they know what it means to crouch and wait for the edge or the lifted foot — and what to do when that happens.

South Africa have taken the more creative but less safe route. Coming from a side often criticised for not thinking more broadly‚ that looks like progress.