Markram makes good first up‚ as do the Kolpakians 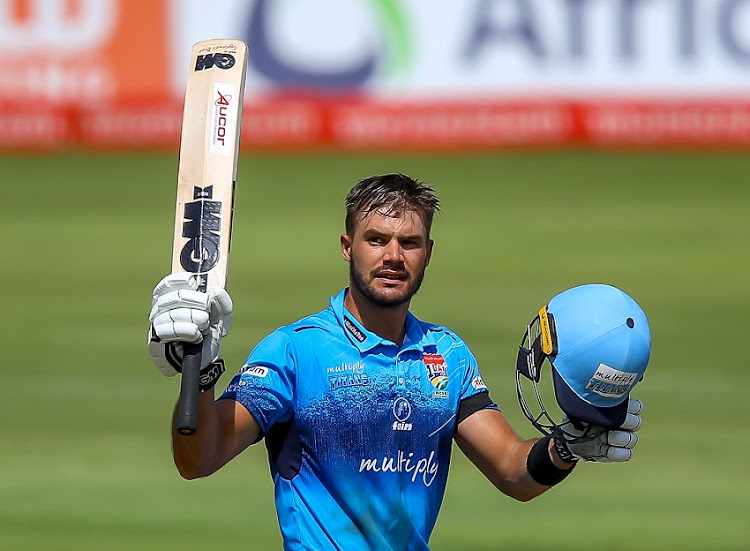 Aiden Markram of the Multiply Titans raises his bat on scoring his hundred during the Momentum One-Day Cup final match between Multiply Titans and Hollywoodbets Dolphins at SuperSport Park on March 31, 2019 in Pretoria, South Africa.
Image: Gordon Arons/Gallo Images

Aiden Markram has made a solid start to his month in the county championship‚ as have several of South Africa’s Kolpak brigade — two of whom are captaining their teams.

Markram will be an overseas professional with Hampshire until early May‚ and will doubtless gather valuable experience of English conditions ahead of the World Cup.

He made a decent first impression by scoring 63 against Essex in Southampton in his only innings in the opening round of championship matches‚ which ended on Monday.

Markram batted at No 3 for more than two hours‚ faced 96 balls and hit nine fours.

But he was upstaged by a compatriot two places lower in the order: Kolpakian Rilee Rossouw‚ who needed 30 fewer deliveries to make 76‚ only a dozen of them not smashed in fours and sixes.

Another of the breed‚ Simon Harmer — Essex’s appointed captain this summer — took 2/134 and then suffered a first-baller as his team followed on 361 behind with still another Kolpak kid‚ Kyle Abbott‚ taking 2/38.

Harmer enjoyed a longer stay in the second dig‚ scoring 62‚ but Abbott claimed 5/77 and Hampshire won by an innings and 87.

Duanne Olivier‚ the 43rd and latest South African to sign a Kolpak contract since the practice began in 2004‚ hit the headlines by taking 5/96 for Yorkshire in the first innings against Nottinghamshire at Trent Bridge‚ a haul that included trapping Stuart Broad in front for a second-ball duck.

But Broad was all the rage on Monday‚ when his first delivery to Joe Root clattered into the England captain’s helmet.

That probably wasn’t Broad’s intent — Root ducked into a ball that didn’t rise as high as he guessed it would — but the thought that that was the fast bowler’s response to being left out of half of England’s six Tests last season duly pinballed around the pressbox for the best part of eight minutes.

That was how long play was held up while Root was brought another helmet and examined for symptoms of concussion.

“You’ve got to make sure you know what day of the week it is and everything‚ so it was just making sure you tick the boxes and for the physio to make sure there was no danger‚” Root told the Daily Telegraph.

“The only thing that was really hurting was my ego‚ letting Stuart hit me like that.

“You expect someone with 400-plus Test wickets to come hard at you like that to do anything he can to get you out. Fair play to him‚ he got it right on the money‚ didn’t he?”

The match was drawn‚ but down south in Taunton‚ Heino Kuhn‚ also a Kolpak defector‚ was nursing his own eina after his 18 and second-ball duck became part of Kent’s 74-run loss to Somerset.

Kuhn is captaining Kent in the temporary absence of regular skipper Sam Billings and vice-captain Joe Denly‚ who are playing in the Indian Premier League.