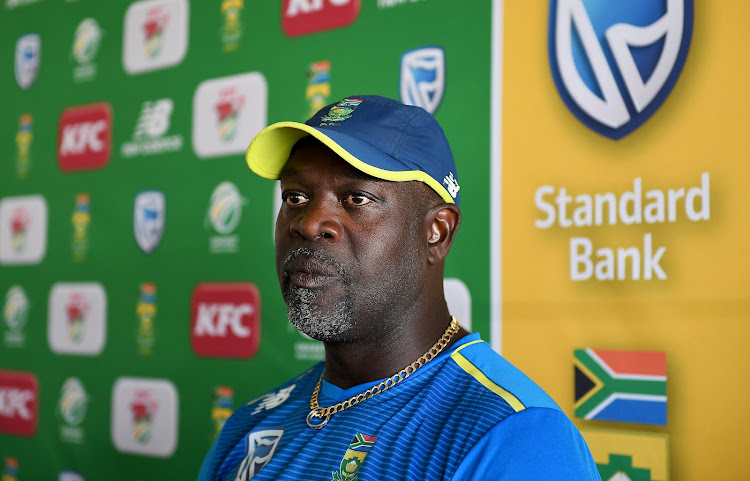 The Proteas head coach Ottis Gibson addresses the media during a press conference at Newlands in Cape Town on March 18 2019.
Image: Ashley Vlotman

If you didn’t know South Africa were starting a T20 series against Sri Lanka at Newlands Stadium in Cape Town on Tuesday‚ you mightn’t have been any the wiser after Ottis Gibson’s press conference on Monday.

That’s no fault of Gibson‚ who spoke two days after South Africa had completed a 5-0 whitewash of the Lankans in the one-day series.

And‚ more importantly‚ 10 weeks and three days — or 73 days‚ or even 1 752 hours — before Faf du Plessis’ team take on England at the Oval in the opening match of the World Cup.

“The one-day series gave us a good look at some players‚” Gibson told reporters in Cape Town.

“Obviously the result is quite pleasing in terms of confidence and momentum and all that sort of stuff.”

He watched Du Plessis and Quinton de Kock score centuries — and more than half of South Africa’s runs in the series — a reassuring half-century for Aiden Markram and a fourth 50 in eight career innings for Rassie van der Dussen.

Imran Tahir took nine wickets at an average of 13.00 and an economy rate of 3.44‚ making him the rubber’s leading bowler in all those categories.

Anrich Nortjé made his debut‚ played in all but one of the games and took his chance and with it eight scalps at 18.75 and 4.76.

On the downside‚ Reeza Hendricks — who hammered a century and two half-centuries in his first dozen ODI innings — scored only 42 runs in four trips to the crease against the Lankans‚ and Lungi Ngidi had acquired what Gibson described as “a slight niggle” in Saturday’s match.

“We saw Nortjé come in and do really well‚ [and] we’ve seen Rassie now for a while‚” Gibson said.

And then there’s Hashim Amla‚ the rock of South Africa’s batting for most of his 11 years as an ODI player — but who missed the series against Sri Lanka because his father is seriously ill and who won’t play in the T20s for the same reason.

Will his sterling record‚ which stands at 7,910 runs in 171 innings at 49.74 with 27 centuries‚ be enough for him to crack the nod with the selectors for the World Cup squad?

“But if there’s no form to go with you have to look at reputation‚ I guess.

“Hash’ hasn’t played any cricket for a long time because of his family situation. So when we sit down to discuss the team that will surely be one of the things we will have to consider.”

What relevance could three T20s hold what with a World Cup squad coming in the next few weeks?

Gibson said he wanted his team to “continue the form that we’ve had” at Newlands on Tuesday‚ in Centurion on Friday and at the Wanderers on Sunday.

He also said the door wasn’t shut on aspirant bolters.

“Playing international T20s you still have an opportunity. As a selection panel we’ve always looked at it as a Ryder Cup selection — the Ryder Cup captain has a wild card pick.

“So there’s still an opportunity if somebody comes and does something unbelievable in the next couple of games.”

While we’re at it‚ coach‚ will Andile Phehlukwayo or Dwaine Pretorius be your World Cup allrounder?

Gibson cracked a smile: “Do you want me to just name the team then?

“Those are the two that seem to be ahead at the moment. If they’re here‚ they’re in possession.”

"They are indeed in the squad for all three T20s. Whether they will both go to England will be known soon enough," said Gibon.