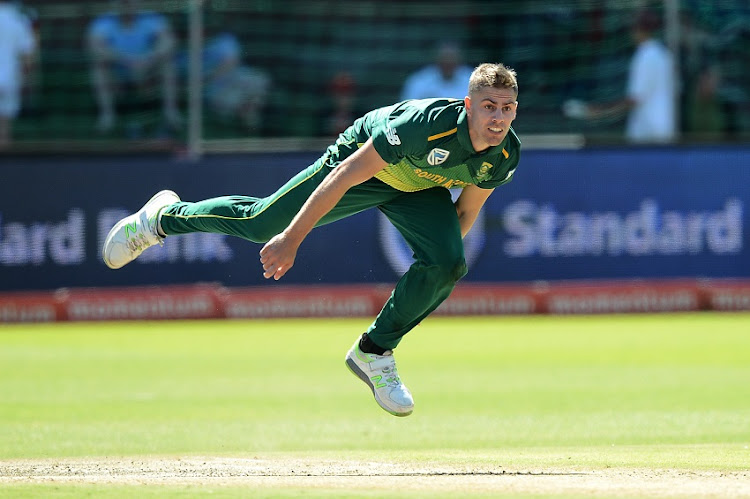 Speedster Anrich Nortje is prepared to take the knocks as he grows into his role as a strike bowler for the Proteas.

He bowled beautifully up front to dismiss three of Sri Lanka’s top order batsmen to have the tourists reeling at 71 for six.

At that stage‚ his figures read a tidy and impressive three for 19 in six overs.

He came back for a second spell with the total on 141 for nine with Sri Lanka tailender Isuru Udana set on 32 off 40 balls.

Udana then clubbed the Warriors fast man for 23 in his seventh over and 15 off his eighth.

The former Brandwag schoolboy star finished with three for 57 as Sri Lanka were rolled for 189.

It was a story with two contrasting chapters but Nortje was happy to take whatever he could from the experience.

“It was a very nice game to be honest.

"I really enjoyed it. Obviously disappointed at the end.

"The last two overs didn't go according to plan but I think it's a nice learning curve. I can only take some positives from this and learn from it‚” Nortje said.

“After the sixth over I was in a good space and really happy. It was such a great feeling to be able to contribute.

"I obviously took one wicket in the first game and two in the second game. To build it up was sort of nice and a great feeling to know that I can contribute a little more every game‚” he added.

There appeared to be a plan to bowl short to Udana‚ who finished with 78 off 57 balls‚ and Nortje admitted they got it wrong.

“I spoke to Faf afterwards and a few guys to get the right plan for next time. I think maybe I might have been a little bit too straight.

"It didn't work 100 percent. I was backing myself most of the time but it was maybe just the wrong plan in the end.”

Nortje is one of the players in line for possible inclusion into the World Cup squad for England and Wales starting at the end of May.

But he said he prefers to take care of what he can and leave the decisions to the men in change.

"It's just another great opportunity to play. I can't control what happens after that so for me it's just to come out and give it my best shot every game.

"What the selectors think of the performance is up to them but for me it's just about every opportunity to try and run in give some aggression.”

The 25-year-old said he is enjoying life in the national set-up.

“I felt like I have got a lot of freedom to do what I want to do‚" he said.

"I can do my part the way I want to do it. I don't have to follow anyone else's footsteps the way Dale or Kagiso does it.

"The way I play domestic cricket is what got me here. So‚ just to take that in and obviously margins are smaller and the plans will be different."

South Africa lead the series 4-0 and will be chasing a whitewash in the final match at Newlands in Cape Town on Saturday.