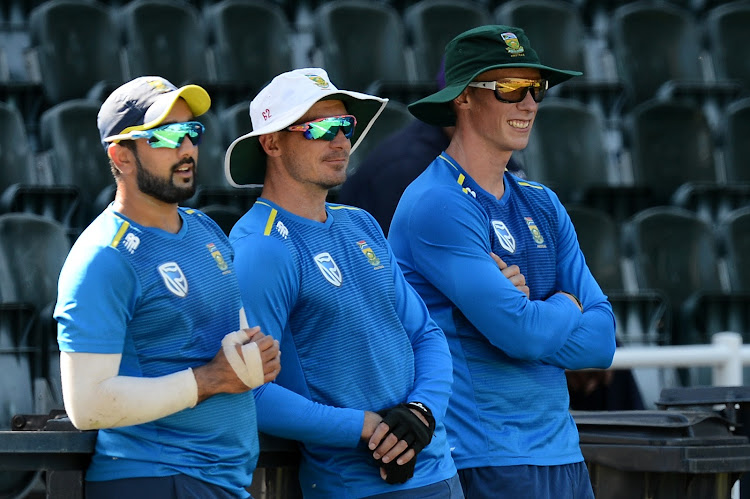 Dale Steyn will go to the World Cup and JP Duminy seems set to join him‚ but there appears to be less certainty about Hashim Amla’s chances of playing in the showpiece.

All three are in the 14 named for the last two one-day internationals against Sri Lanka this week — the last chance South Africa will have to see their players in action before naming their World Cup squad.

Faf du Plessis left no doubt about Steyn’s inclusion talking to reporters in Durban on Sunday about how South Africa will approach this week’s games.

“As far as Dale in concerned‚ he’s going to the World Cup‚” Du Plessis said.

“[Anrich Nortjé will] definitely get another opportunity out of the next game and then hopefully Dale in one of the other games.”

Du Plessis said Steyn should be fresh for the tournament‚ which will be played in England in May‚ June and July.

“He’s not going to go to the IPL [Indian Premier League]‚ so for now his workload can continue — he can keep bowling in the nets.

“There was a thought of releasing him to go and play for the Titans‚ but the Titans are playing well and the balance of their side is probably going to stay the same.

“So we thought best just to keep training with us. He will get one game out of the next two.”

Du Plessis welcomed Duminy’s return from shoulder surgery that has kept him out of the international equation since October.

He has since scored two half-centuries in three list A innings for the Cobras.

“The most important thing from JP’s point of view is that he got over his injury‚” Du Plessis said.

“So it’s great that he got runs‚ but that was the concern for the leadership group — that he goes and plays two games and gets back into cricket.

“We know what he brings to the team from a performance point of view. So it’s good that he comes back into the next two games with some nice form.”

But Amla‚ who is attending to family business and was replaced by Reeza Hendricks in the first three ODIs against the Lankans‚ all of which were won by South Africa‚ seems on less solid ground.

“Hash has played a lot of cricket for South Africa and he’s got an amazing record.

“But we needed to make sure Reeza [Hendricks] got an opportunity this series. If ‘Hash’ gets another opportunity coming back into the side‚ hopefully he grabs that with both hands.”

Amla has been a giant of the game for most of his career‚ but he has scored only one century in his 16 ODI innings since the start of 2018.

Du Plessis sounded adamant that he was looking ahead to what needed to be done and not at what had been done — even by players of Amla’s stature.

“The main concern for me with all the players is that you need to make sure you put performances on the board to go to the World Cup.

“It’s about our best and most in-form team. Everyone in the dressingroom knows that‚ and I believe it’s making us want to raise the bar on our own performance.”

That desire is becoming more evident in a team who have won 15 of the 25 ODIs they have played since 2018‚ including seven of the last 10.

“The guys are going towards the right direction‚” Du Plessis said.

“We’re making less mistakes‚ we’re getting better as a team.

“This series was about answering the questions that we had from a balance point of view‚ and I’m 99.9% sure we’re there where we need to be.

“The next two games will give us the 0.1% of the things that are still in pencil.”

Soon it will be time to tattoo the World Cup squad in ink.

Only a dozen bowlers in cricket history have reached 100 wickets in one-day internationals faster than Kagiso Rabada, but South Africa’s pace ace is ...
Sport
2 years ago

Duminy‚ Markram‚ Amla back‚ but no room for Hendricks‚ Mulder

JP Duminy is in line to play for South Africa for the first time in five months after being included in the squad for the last two one-day ...
Sport
2 years ago
Next Article