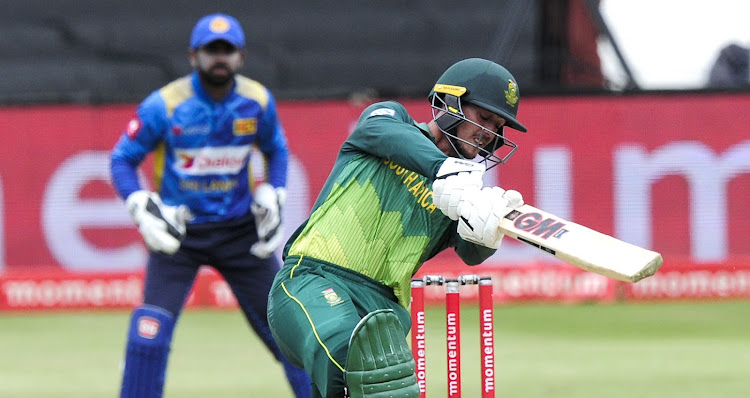 Quinton de Kock of South Africa hits the ball hard during the third One Day International Series game between the Proteas and Sri Lanka at Kingsmead Cricket Ground in Durban on March 10 2019.
Image: Gerhard Duraan/BackpagePix

Just days ago Quinton de Kock lamented not turning sturdy scores into centuries in recent innings, but he remedied the situation emphatically at Kingsmead on Sunday.

De Kock’s 121 was the centrepiece of South Africa’s total of 331/5 in the third one-day international against Sri Lanka.

Rain interrupted the visitors’ reply after 16 overs, when they were 75/2, and their target was revised to a steep 193 off 24.

That meant the Lankans had to score 118 off the last eight overs, and they slumped to 121/5 to make South Africa winners by 71 runs and give them the series 3-0 with two games to play.

Going into the match De Kock had scored at least 50 in six of his last seven innings for South Africa and been dismissed within 20 runs of a hundred in five of them.

“I was quite disappointed,” he told reporters in Centurion on Wednesday after making 94 in the second ODI.

“Lately I have not been converting these 80 and 90s to bigger scores.”

Problem solved, then. Sunday’s effort was De Kock’s 14th century in the format and his first in 18 ODI innings.

It anchored the innings from the first ball, bowled by Lasith Malinga, which De Kock put away through midwicket for four, to the last delivery of the 31st — full and wide from Kasun Rajitha, which De Kock tried to muscle over cover but edged and was caught behind to end a stay of 108 balls in which he hit 16 fours and two sixes.

De Kock dominated all three partnerships he batted in, and once he was dismissed David Miller kept a steady hand on proceedings in his unbeaten 41.

Half of South Africa’s six pairs shared more than 50, and only Reeza Hendricks — who gave his wicket away for four with a chipped catch to mid-off — didn’t make a sizeable contribution.

Of the rest only Rassie van Dussen faced significantly more balls than he scored runs, but few will quibble with the sensible way he went about compiling his 50 off 67.

Still, South Africa looked set for a far bigger total when De Kock was dismissed, and the fact that they forged as far as they did past 300 was thanks to Andile Phehlukwayo.

He came to the crease in the 47th over with licence to lay into the bowling, and he did — hammering five fours and a six in his 15-ball 38 not out.

The Lankans made an unsteady start to their reply when Kagiso Rabada and Lungi Ngidi removed openers Niroshan Dickwella and Avishka Fernando, both caught at mid-on, inside eight overs with 35 on the board.

Oshada Fernando and Kusal Mendis had taken their steadying stand to 40 when the rain came, but Tabraiz Shamsi and Imran Tahir dismissed them for 25 and 41 in the first 20 balls bowled after the resumption to end the visitors’ serious hopes of winning.

Sri Lanka, a perennial repository of some of the game’s most innovative players, gave a debut to Kamindu Mendis, who bowls both off-spin and left-arm spin.

Kusal Perera would have been happy to return to Kingsmead, the scene of his undefeated 153 that took the Lankans to a fairytale one-wicket win in the first Test last month. But he injured a knee while fielding and was taken to hospital.

The fourth ODI will be played at St George’s Park on Wednesday.

Only a dozen bowlers in cricket history have reached 100 wickets in one-day internationals faster than Kagiso Rabada, but South Africa’s pace ace is ...
Sport
2 years ago

Solidarity CEO: 'I don't know of any black coach who is overlooked because of the colour of their skin'

Solidarity chief executive officer Dirk Hermann said quotas have negative connotations for black players who have made it through to the elite ...
Sport
2 years ago
Next Article