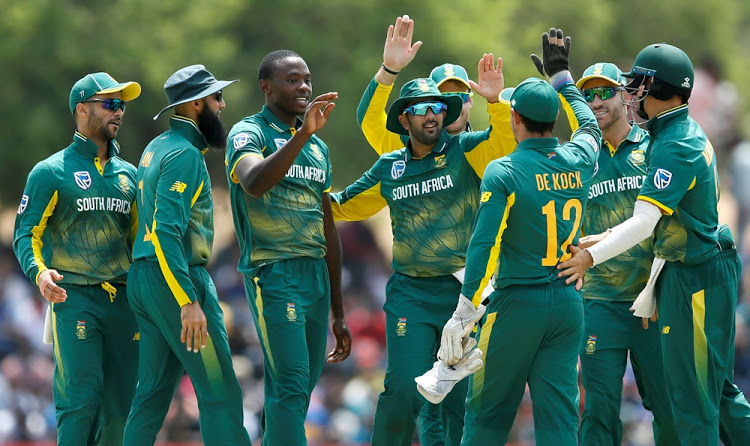 Kagiso Rabada celebrates with his teammates after taking the wicket of Sri Lanka's Shehan Jayasuriya during the first one day international on July 29, 2018.
Image: REUTERS/Dinuka Liyanawatte

Only a dozen bowlers in cricket history have reached 100 wickets in one-day internationals faster than Kagiso Rabada, but South Africa’s pace ace is far from satisfied with himself.

Rabada surged to 102 wickets in the format in his 64th ODI in Centurion on Wednesday, when he topped 150 kilometres an hour in taking 3/45 in the second ODI against Sri Lanka.

But, talking to reporters at Kingsmead ahead of Sunday’s third game in the five-match series, Rabada didn’t sound celebratory.

“I’ve felt like I’ve been struggling since Zimbabwe,” Rabada said. “I’ve been finding it hard. I wasn’t really clicking. Although I was still getting wickets it’s not the best that I’ve felt.

“It’s been a huge learning curve for me. I’ve tried to stick my head down and tried to get back to where I was and exceed where I was.

“It’s harder to get wickets in one-day cricket. I just need to find a way.”

Including the two games Rabada played against Zimbabwe in September and October, he has claimed 46 wickets in 18 ODIs at an average of 23.28, an economy rate of 4.15 and a strike rate of 33.5.

If he is “struggling”, “finding it hard” and not “really clicking” — and only he will know that — it’s difficult to tell.

But, from the outside looking in, it doesn’t seem as if he needs to “find a way” to get people out.

That’s happening as it should, although the fact that Rabada has featured in 119 of the 174 matches South Africa have played across all formats since he made his debut in November 2014 should sound a warning.

And especially so with a World Cup coming in England in May, June and July.

“We’re trying not to think too much ahead; we’re trying to buy into that,” Rabada said. “There’s not much time left. We really need to just do it now, everything we’ve been chatting about.

“Sunday’s game is another landmark we need to look at in the present moment, not too far ahead.”

It’s part of being a world class performer never to be happy with your lot; to be constantly striving for bigger, better things.

Or, as they say at the Olympics, “citius, altius, fortius” — faster, higher, stronger.

But it’s more important that 23-year-olds sound like the young people they are and not like tired old souls counting down the days until they can retire.

Rabada is a special talent whose like we will not see often, and it’s cricket’s responsibility to ensure he enjoys having that talent and gets the most out of it as much as the game benefit from his efforts.