Quinton de Kock ‘can be key for Proteas at World Cup’ 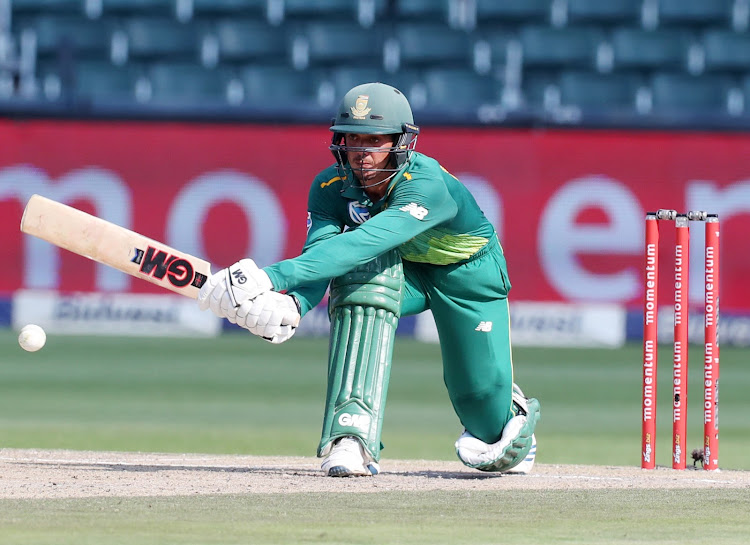 Many will look up to batter-wicket-keeper Quinton de Kock to inspire South Africa to glory in the 2019 Cricket World Cup in England. bats during the 2019 One Day International match between Sri Lanka and South Afric at Wanderers Stadium, Johannesburg on 03 March 2019 ©
Image: Samuel Shivambu/BackpagePix

Proteas captain Faf du Plessis believes that explosive opener Quinton de Kock will be one of the key players for South Africa at the World Cup in England.

The Proteas open the tournament against hosts England at The Oval in London on May 30 and Du Plessis is hoping that De Kock‚ who also doubles up as wicket-keeper‚ takes his current form to the Indian Premier League (IPL) and the tournament.

“Runs are important for any player and as long as he is scoring runs it is good for all of us because he is going to be a big factor at the World Cup‚” said Du Plessis as the Proteas prepared to take on Sri Lanka in the second ODI at SuperSport Park in Centurion on Wednesday.

South Africa are looking to take their lead to 2-0.

The Proteas started their last ODI series at home before travelling to the World Cup with a comprehensive eight-wicket win over Sri Lanka on Sunday in Johannesburg with De Kock scoring 81 runs off 72.

“There is still a long time to go before the World Cup but the currency is runs and hopefully he [De Kock] will have a good IPL and transform that to the World Cup‚ because he is one of our most dangerous players‚” Du Plessis said.

“If you have three of the most senior men in the team firing‚ you will have a chance of having a good tournament and if that doesn’t happen you are going to have an average tournament.”

Du Plessis himself started the series against Sri Lanka with a match-winning knock of 112 off 114 to register his 11th ODI century.

“The last two years have been really good to me in white ball cricket because there has been consistency in my game‚” the skipper said.

“I have been performing different roles of batting at three and at four to challenge myself more to see what suits the team best and we will keep exploring with that a bit.

"What Rassie [Van der Dussen] brings to the team is like myself because he can shift through gears and bat at different positions.

“It is nice to have guys like that in our batting line-up who can bat different roles. I have been batting at number three for the past 10 to 15 games and I wanted to have a crack at No 3 for this series and see what happens.

“We will make a call after this series about who are the five or six batsmen for the World Cup.”

“It is going to be difficult to stop the noise in the build-up to the World Cup. The noise will be turned up a bit when we get closer but for us we are trying to get our processes every time we play.

“We focus on stuff that we have been practicing and I like to see that Rassie played very well under pressure and he was composed and that’s what we try to do. At the World Cup‚ it is going to be how you play every moment.”

Proteas slow bowler Imran Tahir will call time on his international ODI career after the World Cup in England to make way for younger spinners.
Sport
2 years ago

Hashim Amla appears to have lost his starting place at the top of the Proteas ODI line-up with the World Cup a few months away.
Sport
2 years ago
Next Article