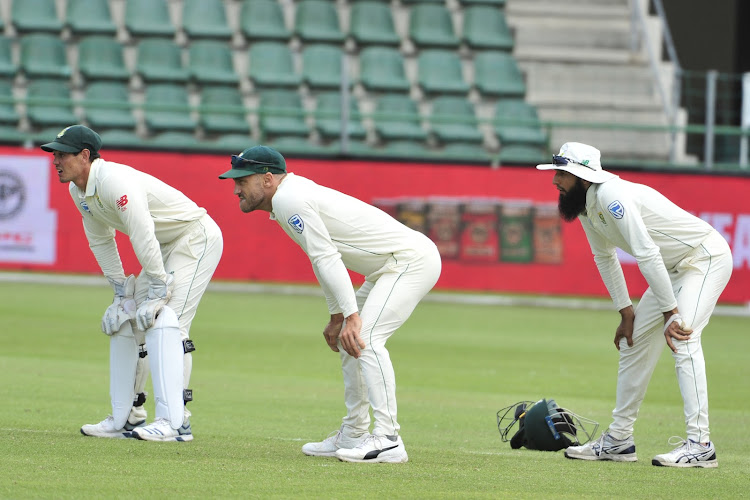 Addressing the media after being thumped by eight wickets in the second Test at St George’s Park in Port Elizabeth on Saturday‚ Du Plessis first said there was a bit more to it than making wholesale changes.

Social media erupted with criticism of the Proteas’ top order with most calling for the heads of Hashim Amla‚ Dean Elgar and Temba Bavuma.

“One series doesn't make you a bad player. If it happens over two or three or four series‚ yes‚ then of course. Every single player in the team needs to perform.

"But if you play for a long time‚ you're almost allowed to have one bad series. But if it happens over a period of time of course we will look at it.”

There have been calls for consistent domestic performers like Eddie Moore (Warriors)‚ Pieter Malan (Cobras) and Keegan Petersen (Knights) to be given a chance.

“I can also tell you that it's not easy as walking from domestic cricket and performing‚” Du Plessis stressed.

“Theunis de Bruyn is the next best batter in the country who has been waiting for a while and (Zubayr) Hamza is the other guy - if you take their records it's not better than Dean Elgar or Hashim Amla or myself.

“It’s always easy to say when those guys are not performing to get new faces in.

"But it doesn’t always happen like that. It's Test cricket and it's supposed to be harder. But of course this series our top order did not score the amount of runs they should have against an attack which we should have done better."

On Friday‚ South Africa batting coach Dale Benkenstein said the team had been complacent heading into the series against Sri Lanka.

“We have our meetings‚ we do our tactical stuff‚ we do our video analysis. Sri Lanka had some new guys that we needed to get some intel on and we looked at that. They came here with very little to lose and played very well.

“Knowing what we wanted to achieve in terms of Test cricket for the summer in winning five Tests matches‚ we weren’t good enough in these two.”

Gibson doubted whether the result of the Test series would have dented the confidence of those playing for spots at ICC World Cup in England and Wales starting at the end of May.

“I don’t think that should be the case and I don’t think it is. Not everybody that is in this squad is vying for a World Cup place. Some of the guys here . . . their minds should have been fixed on doing very well here especially after the fact that we lost in Durban.

"But‚ I don’t believe that the World Cup has any real significance in how we performed this week.”

The teams now shift into one-day international mode with the first of five matches being contested in Johannesburg on Sunday‚ March 3.

Proteas paying for their complacency in Sri Lanka series

Batting coach Dale Benkenstein said there had been complacency in the minds of the Proteas players heading into the Test series against Sri Lanka.
Sport
2 years ago