Time on the sidelines helps Zubayr Hamza climb the stairs 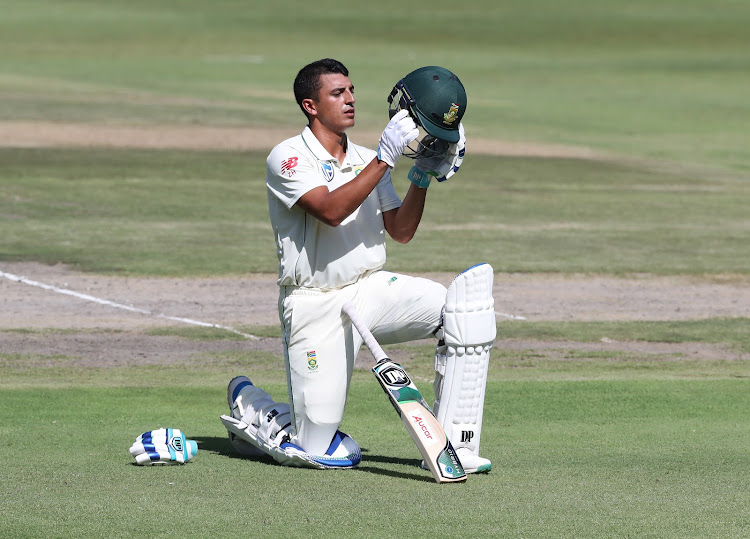 The Cape Cobras batsman Zubayr Hamza dats during day one of the Castle Lager Test Series match against Pakistan at the Wanderers in Johannesburg on January 11 2019.
Image: Gavin Barker/BackpagePix

Oh happy day: December 6‚ when Zubayr Hamza was named in South Africa’s squad for their Test series against Pakistan.

But 35 more days‚ two Tests‚ and a session‚ and another hour‚ had passed without Hamza starting his journey in international cricket.

Then Hashim Amla got himself into a tangle trying to play Shadab Khan to midwicket and edged into the cordon...

“When that wicket fell and I had to walk down the long Wanderers steps‚ I definitely felt the pressure and the nerves‚” Hamza told a reporter in Durban on Sunday.

You wouldn’t have thought so.

The seventh ball he faced‚ from Mohammad Amir‚ squirted away off the edge through gully for four. But the other eight boundaries in his 41 confirmed his class‚ as did a whipped six over midwicket off Shadab.

Those 35 days of hanging around — although he did play a first-class game for the Cobras during that time — had been valuable after all.

“It was important to me to come into the side and be in an environment where I didn’t feel under any pressure to not be myself‚” Hamza said.

“You’re comfortable off the field so you can fully immerse yourself in what needs to be done on the field.

“In and around the changing room everybody is friendly‚ approachable‚ welcoming. So I kind of got a sense of what the environment’s about‚ what it’s like playing on the field.

“Just sitting on the sidelines you can see everyone and the focus and the energies and intensity that is required on the field. So by the time I got my opportunity I had an idea what it was about.”

Hamza was trapped in front for a second-ball duck by a Faheem Ashraf submarine in the second innings‚ but he had done enough to keep his place in the squad for the series against Sri Lanka that starts at Kingsmead on Wednesday.

The ground and Hamza are not well acquainted. He has played only one first-class match there‚ scoring 12 and six‚ and also a single List A game‚ making seven‚ both in January 2017.

Kingsmead can be a challenging place to try and establish yourself as a batter at this level‚ what with the sluggish nature of the pitch contrasting starkly with the flyers these days routinely prepared at the country’s other venues.

But the Lankans have dropped their captain‚ Dinesh Chandimal‚ from a squad of 17 in which eight players own fewer than five caps and four have yet to play a Test.

Suranga Lakmal is the only proven pace threat in an attack that seems set to struggle in conditions that will dull the sharpness of their other key bowler‚ left-arm wrist spinner Lakshan Sandakan.

Not that Hamza will be thinking about all that.

“It has been something I’ve succumbed to — looking too far ahead and then losing my wicket‚” he said.

Kingsmead’s staircase isn’t as long as Wanderers’‚ but that doesn’t matter nearly enough as the fact that part of the secret of batting success is not looking further than 22 yards ahead.

Proteas women cricket coach Hilton Moreeng says South Africa must have a professional league within the next two years in order to develop young ...
Sport
3 years ago

Pakistan coach Mickey Arthur has insisted that his team return home a better side with important lessons learnt despite having lost to the Proteas in ...
Sport
3 years ago
Next Article