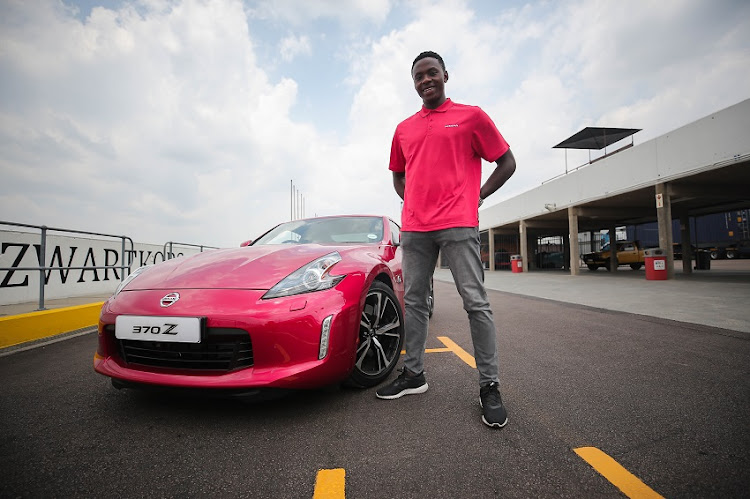 Cricket speedster Kagiso Rabada gets up close and personal with a ferocious all new Nissan 370Z at Zwartkops Raceway.
Image: Alaister Russell

He may be one of cricket’s foremost speed merchants but Kagiso Rabada just got a whole lot faster.

The national team quick‚ who is a brand ambassador for Nissan‚ was tossed the keys to a fiery red 370Z on Thursday.

Rabada took receipt of the two-seater‚ which is worth in excess of R700 000 and which pumps out 245kw horsepower‚ at the Zwartkops Raceway.

Shaun Pollock‚ who used to be a fiery red in his pomp‚ is also an ambassador for the brand.

Perhaps fittingly‚ however‚ Pollock‚ who now operates at more sedate speeds and who is not immune to the odd miscalculation‚ can now do so with confidence in his new all terrain Patrol.

Rabada though‚ needed no reminding of the synergy between him and his new wheels.

“It goes. That is whole reason this deal started with the GTR. It just fits the profile‚” he said with a wide smile. “It is something quite special. It looks very nice. It has good performance as well.

“I’m really glad and I’m really thankful to Nissan for the opportunity to drive that thing. I’m gonna enjoy it‚” he said with a mischievous grin.

Rabada was at the steering of a Juke (not to be confused with the fiery red thing he flings down from time to time).

“It is quite an upgrade‚” he said of his new sports car which is limited to a maximum speed of 249km/h.

“I think my driving habits have always been the same. I’ve always liked speed. I’ve driven some fast cars as well.

For me to drive this every day is quite good. I can’t speed on the public roads but I can bring it to the track. It could be a new hobby of mine.

“I was speaking to one of the professional racers and he showed me how to be quick on the angles and into corners.